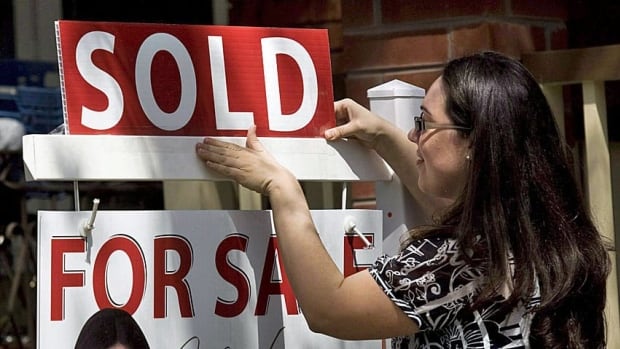 The average price of a Canadian home has increased by almost 10 per cent in the past 12 months. (Darren Calabrese/Canadian Press)
New data released Monday from the organization that represents home sellers shows Canada's housing market continues to hit new highs, with the average price increasing by almost 10 per cent in the last 12 months to $391,085. The Canadian Real Estate Association said the strong gain was in part because this time a year ago, sales were down in some of the largest housing markets.


When prices in Toronto and Vancouver are stripped out of the equation, the average annual price gain was 4.3 per cent, CREA said.
Aside from prices, the realtor group says the number of homes sold was a little below the peak in September, but higher than the number this time last year and still close to the historical average.
A total of 434,678 homes have traded hands across the country this year, CREA says. That's about 0.2 per cent higher than last year's total.
"While there has been a lot of volatility in sales activity from month to month, sales for the year to date are on par with fairly steady levels posted for the same time period in each of the past five years," CREA's economist Gregory Klump said.
The average price rose 9.8 per cent compared to a year ago, but actually had dropped on a monthly basis. November's average price was slightly lower than October's, $391,820.
"Most housing markets are well balanced, including many large urban centres," Klump said.
"Housing price gains are always stronger in places where supply is tight relative to demand, such as we're seeing in Calgary and in parts of southern Ontario including the low-rise market in Toronto."
CBC
Posted by Buzzcanadalive at 4:04 AM

Email ThisBlogThis!Share to TwitterShare to FacebookShare to Pinterest
Labels: Across Canada, Canadians