US Elections 2016: Ted Cruz drops out of the race as Donald Trump wins Indiana 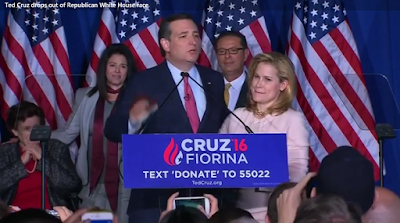 But John Kasich, the other remaining Republican presidential candidate, who has only won 1 state since the Primary election started and only had 7.5% votes in Indiana is still in the race, he has refused to drop out.

Ted Cruz fought really hard, refusing to give up on his campaign but Tuesday night, he announced he was dropping out of the race after he lost Indiana to Donald Trump. It was an emotional announcement that left his parents teary eyed (That's his mum sitting in the above photo). He was also emotional as he made his speech. He said he was dropping out because there was no way he could win the GOP Presidential nominee after losing Indiana.

While Bernie Sanders won Indiana with 52.7% votes and Hilary Clinton-47.3%
Posted by Buzzcanadalive at 3:24 PM

Email ThisBlogThis!Share to TwitterShare to FacebookShare to Pinterest
Labels: America, Election, How Come, President, US