Government Minister Blames Tom And Jerry For The Rise of ISIS 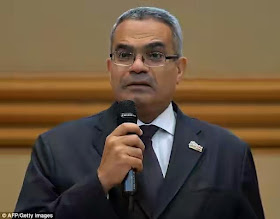 The head of Egypt's Information Service, Ambassador Salah Abdel Sadek has placed the blame for the rise of ISIS squarely at the paws of a well-known cat and mouse. It is said that a bad workman blames his tools but how about one who blames cartoon characters?

Speaking at Cairo University, he said that the characters encourage extremism and teach children that you can blow people up. He opined that the cartoon as well as video games and 'violent' movies helped to spark violence and extremism across the Arab world.

Speaking to the academic audience, he said that Tom and Jerry contributed to the notion that violence was a 'natural' part of life.


According to local media, he said: '[The cartoon] portrays the violence in a funny manner and sends the message that, yes, I can hit him…and I can blow him up with explosives. It becomes set in [the viewers’] mind that this is natural.'

He added that it has become common place for young men to spend hours playing violent video games and that the gamer will be 'happy and content'.

Egyptian fans of the cartoon need not fear though, despite the ambassador's remarks, government has not yet taken steps  to censor Tom and Jerry or video games but these are worrying signs.
They may well enjoy the carnage while it lasts.
Posted by Buzzcanadalive at 12:59 AM