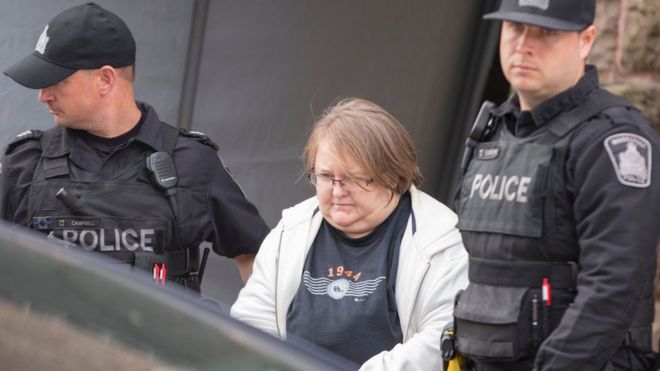 A 49-year-old nursing home worker in Ontario has been charged with eight counts of first-degree murder spanning several years.

Elizabeth Tracey Mae Wettlaufer of Woodstock, Ontario, appeared in court on Tuesday morning.
The victims were residents in two long-term care facilities where Ms Wettlaufer worked and were between 75 and 96 years old.

Police said seven of the victims were given a fatal dose of a drug.

The victims were five women and three men and were all residents of Caressant Care in Woodstock and Meadow Park in London, Ontario.

"The victims were administered a drug... there are obviously a number of drugs that are stored and are available in long-term care facilities," Woodstock Police Chief William Renton said at a news conference.

The chief declined to comment on a possible motive, but did add that investigators are confident that they have identified all victims.

The deaths took place between 2007 and 2014. Police have identified the victims as:

Posted by Buzzcanadalive at 10:12 AM