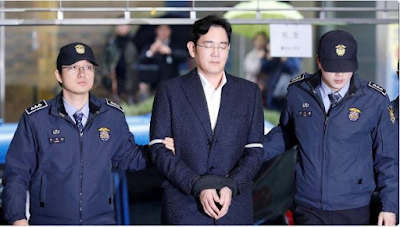 In what poses to be a big blow to the world’s biggest smartphone maker, South Korean prosecutors have said Samsung Group chief, Jay Y. Lee and four other executives will be charged with bribery and embezzlement.

Lee was arrested on Friday, February 17, 2017,  over his alleged role in the corruption scandal involving impeached President Park Geun-hye of South Korea.

In a statement released by Lee Kyu-chul, a spokesman for the special prosecutor, he said:

'The five executives will face charges including bribery, embezzlement and hiding assets overseas.'

'Lee will also be charged with committing perjury before parliament.

The prosecutor's office will make an official announcement regarding the conclusion of its investigation on Monday, March 6, 2017
Posted by Buzzcanadalive at 2:29 PM