Sitting next to the man who raped and made her pregnant, Afghanistan woman forced to marry her attacker to avoid prison. Afghan woman known only by her first name Gulnaz, (pictured left) was just 16 years old when was raped by her cousin's husband, a man named Asadullah (pictured right), in 2008. She fell pregnant as a result of the rape. But in Afghanistan, sleeping with a married man is a crime, and it doesn't matter if the married person forced themselves on you. How sad! Rejected by her family and facing 12 year in prison for 'adultery by force' and falling pregnant for a married man, Gulnaz had no choice but to marry her depraved attacker. That was her only hope to get a reduced sentence. She later gave birth to the girl in the photo above.

Talking to CNN about her life, Gulnaz said she only agreed to marry her rapist so that her daughter - named Smile could live a shame-free life in the Afghan capital's 'traditional' society. 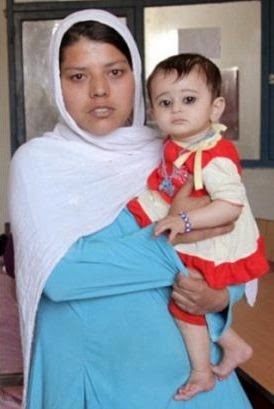 Gulnaz married the rapist in 2013 after her family told her she couldn't return home because she'd 'shamed' their family. Gulnaz said marrying her attacker was her only choice"I didn't want to ruin the life of my daughter or leave myself helpless so I agreed to marry him. We are traditional people. When we get a bad name, we prefer death to living with that name in society,' Gulnaz said.


And through out the interview, she refused to look her husband in the eye. The man, Asadullah - who was jailed for the rape in 2008 but later released, said the woman owed her freedom to him.

'If I hadn't married her according to our traditions, she couldn't have lived back in society. Her brothers didn't want to accept her back. Now, she doesn't have any of those problems." He said.Asadullah is still married to Gulnaz's first cousin - with whom he has five children.
Posted by Buzzcanadalive at 8:34 PM