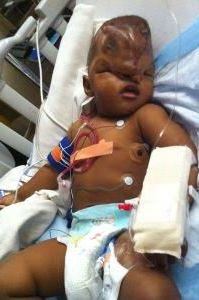 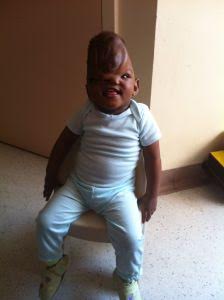 The 22 month-old girl, Fidelis Muthoni from Makuyu in Murang’a county, Kenya who was suffering from frontal encephalocele underwent a free operation in Toronto, Canada to remove a bone growth on her face.

The Canadian doctors volunteered to operate on her for free when her father Kenneth Kinuthia met them in Kiambu county during a medical camp. Muthoni’s plight was highlighted when the family accused her uncle, Hope Foundation founder Joseph Wanjau, of misappropriating the ticket money.

The family said Wanjau voluntered to raise cash on social media to assist them  but he later withrew the Sh2.8 million raised without their consent which made it impossible for Muthoni to be flown to Canada.

Fortunately, Kenya’s President Uhuru Kenyatta intervened and bought air tickets for mother and child to travel before the appointment was called off.


A Kenyan couple in Toronto – Irene & Joseph Maina – also kindly offered to host Martha & Fidelis for free, for as long as they needed. In addition, Irene who is a nurse by profession took it upon herself to transport the two and attend numerous pre-surgery consultative meetings and tests in preparation for Fidelis’s surgery.

Various reports and individuals have at different times erroneously cited Fidelis’s condition as a tumour. Now that the first surgery has successfully been completed and with help of some reports from her doctors, we can correct that. What Fidelis has is referred to as frontal encephalocele, a skull defect characterized by partial lack of bone fusion leaving a gap through which a portion of the brain protrudes.

These images are a 3D replica of Fidelis’s skull before the surgery. You will notice that she was missing the frontal bone (at the forehead) leaving her brain exposed and hanging on the outside.
The goal therefore of this recently performed surgery, known as anterior cranial vault reconstruction, was to enlarge her skull so that the part of the brain hanging outside could be pushed back in. After successfully doing that, the surgeons then grafted a bone from her skull to cover the opening so that she now has a forehead.

Part of the surgery is done and there remain other complex surgeries which will among other things involve residual cosmetic work that is needed to reconstruct the nose and bring her eyes closer together. Unfortunately, due to Fidelis’s age (22 months) and an infection that developed after this first surgery, subsequent surgeries will have to wait until she is much older.

On January 25, Fidelis was medically cleared by the team at Sick Kids, referred and accepted into the care of two doctors in Kenya: Dr. Bernard Githae, a plastic and reconstructive surgeon at Kenyatta National Hospital and Dr. Peter Wanyoike, a consultant neurosurgeon formerly of KNH and the one in charge of Fidelis’ referral.

Baby and her mother who is expecting her third child in March returned to Kenya on Monday, February 1.
Posted by Buzzcanadalive at 2:22 AM