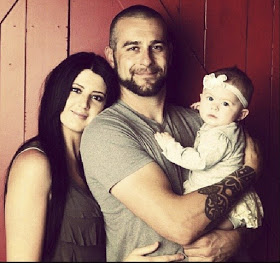 This baby was saved from drowning by a mysterious voice. Four police officers said they heard a mysterious adult voice calling for help from a scene of a car crash in northern Utah. When they rushed there to help, they only found 18-month-old Lily alive. Her 25-year-old mother had died in the crash. The police said they could have sworn they heard an adult female voice calling to them for help...but only met Lily trapped in the car but alive in the icy river. The mother was long dead

At 10 o'clock on a Friday night in March last year Jennifer Groesbeck veered off a road in northern Utah as she drove back from dinner at her father's home and hurtled into the icy waters of the Spanish Fork river.

What caused her to swerve remains a mystery but, unluckily, the front wheel of her car caught the edge of the bridge's concrete wall, causing the vehicle to flip over it and crash down into the river. It landed upside down in the shallows with such force that the windscreen was blown out and the roof crushed as if it had been cardboard.

Out of sight from the road, the red Dodge hatchback sat in chest-high foaming water for 14 hours until it was spotted by an angler, who reported seeing a hand dangling out of a broken window.

Four local police officers arrived first, their sense of urgency captured by the body camera one of them had switched on and whose footage has since been watched thousands of times on the internet.

They dash into the water - so cold that a total of seven policemen and firemen were later treated for hypothermia - and desperately try to get inside the crushed vehicle. Then, about two minutes into the body camera footage, its microphone picks up the faint sound of an adult voice, sounding urgent. It is unintelligible on the footage but appears to be a plea for help as Officer Jared Warner responds: 'We're helping, we're coming.'

Something very odd had just happened, although the emergency responders weren't to realise it at the time. With visibly new urgency, the rescuers turned the waterlogged car on to its side and discovered the 25-year-old driver was long dead.

But there was a baby in the back seat, Mrs Groesbeck's 18-month-old daughter, Lily. Upside down and strapped into a child seat that had kept her out of the water and - crucially - kept her clothes dry, she had remained there for an age, her face suspended just above the churning river.


Unconscious and suffering from hypothermia, Lily was successfully revived at hospital.
Her miraculous survival made headlines around the world, and it wasn't until later that the four policemen discussed those frantic minutes and realised there was something very puzzling about them.
If the mother had died in the initial impact of the crash and the baby was unconscious, whose was the female voice they each swore they had heard coming from the car?
One of those policemen, Tyler Beddoes, believes he knows the answer: Lily was saved by a heavenly guardian who had comforted her during that bleak, freezing night in the half-submerged car and then called for help as her life hung in the balance.

In a new book, Proof Of Angels, Beddoes - an officer with ten years' experience - describes how the rescue has solidified a religious faith he previously hadn't really felt.

One doesn't have to be a sceptical atheist to wonder whether someone might be trying to find a religious message here that isn't warranted. Beddoes is a Mormon, a religion that believes we all have a guardian angel.

The Lily Groesbeck case, nevertheless, defies any easy explanation. One impressionable or superstitious officer could decide to believe he heard a mysterious voice. But four witnesses are harder to dismiss, especially with video footage capturing a muffled voice and the officer's response to it.
Quizzed later, each of the rescuers concurred in what they had heard.
Officer Bryan Dewitt said: 'We were down on the car and a distinct voice says: 'Help me, help me.' '
Jared Warner, the policeman who was in the video saying they were doing their best, said a few days later: 'All four of us can swear that we heard somebody inside the car saying 'Help'.'
'I think it pushed us to go harder a little longer. I don't think that any one of us had intended on flipping a car over that day.'

Beddoes soon became the spokesman for the four, as his colleagues grew wary of being labelled as naive - or mad.
Posted by Buzzcanadalive at 9:10 AM