Busted! Two Canadian Women Arrested With Cocaine Worth $29m in Australia While On Worldwide Cruise 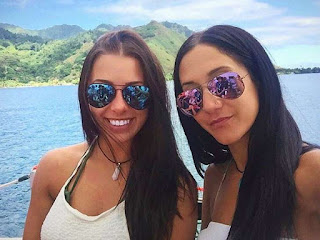 Two Canadian women 23-year-old Melina Roberge and 28-year-old Isabelle Lagacé, who were on a dream world wide cruise were on Monday arrested by the police in Australia, according to a release by the Australian authorities.

Authorities say approximately 95 kilograms of cocaine were allegedly found in the suitcases of the two friends and another Canadian man, 63-year-old man, Andre Tamine who was travelling with them when they arrived in Sydney on a cruise ship. All three were arrested in Australia.

According to the Daily Telegraph, the value of the drugs was $30 million Australian dollars, which is about $22 million in U.S. dollars or $29 million Canadian dollars.

The bust came on the 51st day of a 68-day cruise on the Sea Princess, reports the Sydney Morning Herald. The Star states authorities were prepared to search the ship when it arrived in Sydney after a joint investigation which included the Canadian Border Service Agency and the U.S. Department of Homeland Security.

They shared photos from exotic locales around the world including Tahiti, Peru, Bermuda, Morocco and more. "Traveling is one thing ... But traveling with an open mind, ready to taste everything, see everything, learn everything and get yourself out of your comfort zone .. Is probably the best therapy and lesson ever," Roberge wrote in one post from the holiday.

The women had spent the past two months cruising around the world and documenting their lavish holiday on their public Instagram accounts. According to Facebook accounts that appear to belong to them, Lagacé was a waitress at a Longueuil bar and Roberge was a manager at a Montreal jewelry store. According to their Instagram accounts, they began their adventure on July 9 in Southampton, England.

Clive Murray from the Australian Border Forces said the bust came after work alongside US and Canadian authorities.

He said: "These syndicates should be on notice that the Australian Border Force is aware of all of the different ways they attempt to smuggle drugs into our country and we are working with a range of international agencies to stop them."

AFP Assistant Commissioner Crime Operations Shane Connelly said: "Today’s successful operation has resulted in three arrests and we will not rule out further activity as we continue our investigations. "The AFP is committed to working with its partner agencies to protect the community by stopping these dangerous drugs making their way to Australian communities, and bringing those responsible to justice."

The trio have been charged with importing drugs and are due in court this week and now face life imprisonment if convicted of drug smuggling in Australia, where cocaine prices are among the highest in the world.