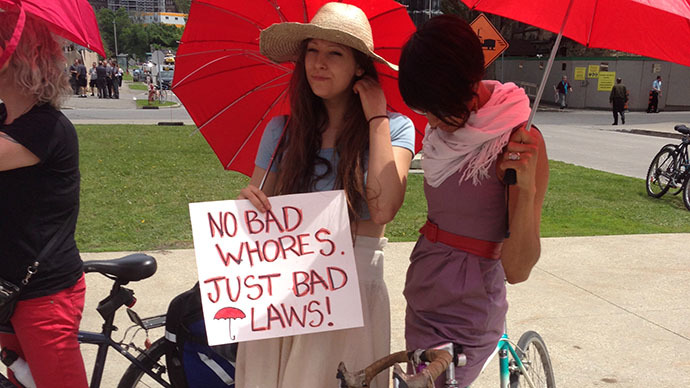 Stephanie LevitzThe Canadian Press
It’s “sick and twisted” that Canada’s controversial new prostitution bill comes into force on a day dedicated to eradicating violence against women, says one of the women behind a successful court challenge of the old laws.

The new legislation, known as the Protection of Communities and Exploited Persons Act, comes into force on Saturday, Dec. 6, which is also the National Day of Remembrance and Action on Violence Against Women.

The day — the anniversary of the shooting deaths of 14 women at Ecole Polytechnique in Montreal at the hands of gunman Marc Lepine — has evolved into an occasion to commemorate all female victims of violence.

Those who work in the sex industry have expressed their disdain for the new prostitution laws, which they fear will result in more victims, not fewer.

“I think that it’s a really sick and twisted day for it to happen,” said Valerie Scott, one of three women behind the landmark Supreme Court case that declared Canada’s legislation on prostitution unconstitutional.

“We’re excluded from all these events.”

Pickton, a B.C. pig farmer, was convicted almost exactly seven years ago for the gruesome murders of six prostitutes, and had been charged for the deaths of 20 others.

The case was among those referenced by the Supreme Court last year when it struck down Canada’s prostitution laws, arguing that they deprived sex workers of the ability to work safely.

Among other things, the law denied prostitutes the ability to properly screen clients.

“If screening could have prevented one woman from jumping into Robert Pickton’s car, the severity of the harmful effects is established,” Chief Justice Beverley McLachlin wrote in the high court’s unanimous decision, released Dec. 20, 2013.

The decision gave the government one year to establish new laws, a deadline the Conservatives made clear they intended to meet. The new bill was introduced June 4, reviewed by both the House of Commons and Senate and granted royal assent on Nov. 6.

By the bill’s own terms, it was slated to come into effect 30 days after that — which is how Dec. 6 came to be the date.

“We do not control the passage of bills in the Senate, nor when a bill receives royal assent,” said Clarissa Lamb, a spokeswoman for Justice Minister Peter MacKay.

“But I will reiterate that we are proud of the fact that this bill and new resources demonstrate the government’s commitment to meaningfully support those exploited through prostitution.”

The government is too stuck on their message about positive elements of the bill to realize the date it comes into force could be offensive, said NDP justice critic Francoise Boivin.

“I’m sure if they had thought about it, they might have picked another date, if they were a bit sensitive,” she said.

“But they don’t care. They don’t think about these things.”

The bill criminalizes the purchase of sex as well as things like advertising or other forms of communication related to its sale, though it provides some legal immunity for sex workers themselves.

The government says the law gives prostitutes the ability to create safer working conditions for themselves. Critics question that, given that it makes most elements of the sex trade illegal.

Some advocates for sex workers went so far as to say Wednesday they’re not convinced the Dec. 6 date was an accident.

Kerry Porth, a board member at Pivot Legal Society, a Vancouver-based legal advocacy group, noted that MacKay seemed unclear about Lepine’s motives Tuesday when he spoke about the Montreal massacre in the House of Commons.

“It’s unbelievably repulsive,” Porth said. “What they are really doing is setting a particular type of woman aside — sex workers who choose their work — and pretty much indicating through these laws that they’re fair game.”

MacKay said it would be impossible to ever know why the 14 women in Montreal were singled out, leaving out mention of Lepine’s self-professed hatred of women. He later tried to clarify his remarks.

“I was suggesting this is an issue where we should be respectful, mourning the loss of those women, mourning the loss that their families have suffered and endured for 25 years. That was it,” he said.
Posted by Buzzcanadalive at 9:00 AM