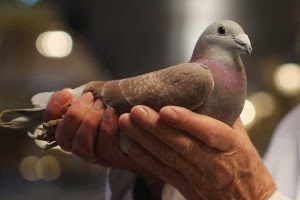 Police in Germany are looking for a missing pigeon, and any finder could be in line for a 10,000-euro ($12,250) reward. Duesseldorf police said Tuesday that the 6-year-old male homing pigeon, named AS 969, was stolen at some point on Saturday night from a locked aviary in the city's suburbs.

They say the light gray bird is valued by its owner at 150,000 euros ($184,000) and police suspect the thief or thieves were "connoisseurs" as it was the most valuable in an aviary full of other homing pigeons.

The owner offered a 10,000-euro reward for the bird's recovery.
Posted by Buzzcanadalive at 8:00 PM