Is This Life! Saudi Woman Arrested For Driving 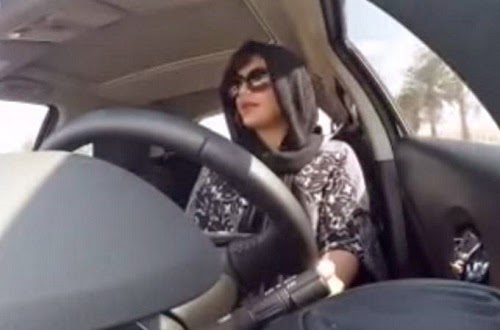 A woman who tried to drive in defiance of a ban on women drivers in Saudi Arabia has been arrested after being blocked at the border with the United Arab Emirates for a day, activists said along with many users on social media. Saudi Arabia is the only country in the world which does not allow women to drive.

"I have been at the Saudi border for 24 hours. They don't want to give me my passport nor will they let me pass," Loujain Hathloul, the arrested woman said in a tweet.

Continue below...
Activists said she was arrested on Monday afternoon, but the interior ministry could not immediately comment on her case.

Another woman, UAE-based Saudi journalist Maysaa Alamoudi, who went to support her, was also arrested, an activist told the AFP news agency.

"They transferred her and Maysaa... to the bureau of investigation" at a Saudi police station, said the activist who asked for anonymity.

She said her driving licence "is valid in all GCC countries", a reference to the six-nation Gulf Cooperation Council which includes Saudi Arabia.

Hathloul also posted details about her long confinement in her car.

Once her tweets stopped, users and activists took to Twitter to express worry and gather information.

Meanwhile Al al-Ahmed, a Saudi Arabia analyst, tweeted that he had confirmation that Hathloul's arrest had been ordered.

Another Saudi writer and activist, Hala Al-Dosari tweeted that the two women had been transferred to the general bureau of interrogation.

The other activist who spoke to AFP said Hathloul was trying to make a point in her unusual attempt to drive through the border.

"She knew that they wouldn't let her pass," the activist said.

During October dozens of women drove in Saudi Arabia and posted images of themselves doing so as part of an online campaign supporting the right to drive.

In response, the interior ministry said it would "strictly implement" measures against anyone undermining "the social cohesion".

Women drivers have previously been arrested and cars have been confiscated, activists say.

Source: Al Jazeera
Posted by Buzzcanadalive at 6:30 AM