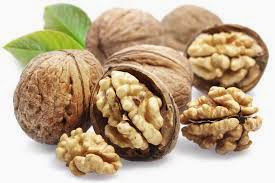 Walnuts belong to the tree nut family, along with Brazil nuts, cashews, hazelnuts, macadamia nuts, pecans, pine nuts, and pistachios. Each has its own unique nutritional profile.

According to Dr Mercola One-quarter cup of walnuts, for instance, provides more than 100 percent of the daily recommended value of plant-based omega-3 fats, along with high amounts of copper, manganese, molybdenum, and biotin. Some of the most exciting research about walnuts includes:

1. Cancer-Fighting Properties
Walnuts may help reduce not only the risk of prostate cancer, but breast cancer as well. In one study, mice that ate the human equivalent of 2.4 ounces of whole walnuts for 18 weeks had significantly smaller and slower-growing prostate tumors compared to the control group that consumed the same amount of fat but from other sources. Overall the whole walnut diet reduced prostate cancer growth by 30 to 40 percent. According to another study on mice, the human equivalent of just two handfuls of walnuts a day cut breast cancer risk in half, and slowed tumor growth by 50 percent as well.

2. Heart Health
Walnuts contain the amino acid l-arginine, which offers multiple vascular benefits to people with heart disease, or those who have increased risk for heart disease due to multiple cardiac risk factors.
If you struggle with herpes, you may want to avoid or limit walnuts, as high levels of arginine can deplete the amino acid lysine, which can trigger herpes recurrences.

Walnuts also contain the plant-based omega-3 fat alpha-linolenic acid (ALA), which is anti-inflammatory and may prevent the formation of pathological blood clots. Research shows that people who eat a diet high in ALA are less likely to have a fatal heart attack and have a nearly 50 percent lower risk of sudden cardiac death.

3. Rare and Powerful Antioxidants
Antioxidants are crucial to your health, as they are believed to help control how fast you age by combating free radicals, which are at the heart of age-related deterioration.

Walnuts contain several unique and powerful antioxidants that are available in only a few commonly eaten foods. This includes the quinone juglone, the tannin tellimagrandin, and the flavonol morin.6
Walnuts contain antioxidants that are so powerful at free-radical scavenging that researchers called them "remarkable,and research has shown that walnut polyphenols may help prevent chemically-induced liver damage.

In another study, researchers found that nuts, especially walnuts, have potent antioxidant powers. Walnut polyphenols had the best efficacy among the nuts tested and also the highest lipoprotein-bound antioxidant activity. The researchers concluded:

"Nuts are high in polyphenol antioxidants which by binding to lipoproteins would inhibit oxidative processes that lead to atherosclerosis in vivo. In human supplementation studies nuts have been shown to improve the lipid profile, increase endothelial function and reduce inflammation, all without causing weight gain."

4. Weight Control
Adding healthful amounts of nuts such as walnuts to your diet can help you to maintain your ideal weight over time. In one review of 31 trials, those whose diets included extra nuts or nuts substituted for other foods lost about 1.4 extra pounds and half an inch from their waists. Eating walnuts is also associated with increased satiety after just three days.

5. Improved Reproductive Health in Men
One of the lesser-known benefits of walnuts is their impact on male fertility. Among men who consume a Western-style diet, adding 75 grams (a bit over one-half cup) of walnuts daily significantly improved sperm quality, including vitality, motility, and morphology.

7. Diabetes
The beneficial dietary fat in walnuts has been shown to improve metabolic parameters in people with type 2 diabetes. Overweight adults with type 2 diabetes who ate one-quarter cup of walnuts daily had significant reductions in fasting insulin levels compared to those who did not, and the benefit was achieved in the first three months.

Why You Should Eat the Walnut Skin
The outermost layer of a shelled walnut – the whitish, flaky (or sometimes waxy) part – has a bitter flavor, but resist the urge to remove it. It's thought that up to 90 percent of the antioxidants in walnuts are found in the skin, making it one of the healthiest parts to consume.To increase the positive impacts on your health, look for nuts that are organic and raw, not irradiated or pasteurized.

Furthermore, be aware that walnuts are highly perishable and their healthful fats easily damaged. If you're purchasing shelled walnuts in bulk, avoid those that appear shriveled or smell rancid, or that you cannot verify are fresh. Walnuts should be stored in an airtight container in your refrigerator or freezer, whether they are shelled or unshelled.

Walnuts are great as a quick snack, but if you're not a fan of their flavor, you can still get their therapeutic benefits by blending them into smoothies. Or you can try one of the other healthful nuts available.

You can further improve the quality of walnuts by soaking them in water overnight, which will tend to lower some of the enzyme inhibitors and phytic acid. After soaking, you can dehydrate them at low temperature of around 105 to 110 degrees Fahrenheit until they are crispy again, as they are far more palatable when they are crunchy.

Most Nuts Are a Wonderful Food

You can't really go wrong when choosing nuts to eat, as long as you pay attention to quality. By this I mean look for nuts that are organic and raw, not irradiated, pasteurized, or coated in sugar. One exception is peanuts, which are technically in the legume family. My main objections to peanuts are that they tend to:

Distort your omega-3 to omega-6 ratio, as they are relatively high in omega-6

Be frequently contaminated with a carcinogenic mold called aflatoxin

Be one of the most pesticide-contaminated crops

My favorite nuts are raw macadamia and pecans, as they provide the highest amount of healthy fat while being on the lower end in terms of carbs and protein. Most nuts' nutritional makeup closely resemble what I consider to be an ideal ratio of the basic building blocks—fat making up the greatest amount of your daily calories, followed by a moderate amount of high-quality protein and a low amount of non-vegetable carbs. And this is precisely why they're recommended as one of the best sources of healthy fats.

The main fatty acid in macadamia nuts is the monounsaturated fat oleic acid (about 60 percent). This is about the level found in olives, which are well known for their health benefits. I have been consuming macadamia nuts and pecans almost daily since I started lowering my overall protein intake about a year ago. The following list shows the nutrition facts in grams per one ounce for your most common tree nuts (one ounce of nuts equates to just over 28 grams, or about a small handful)