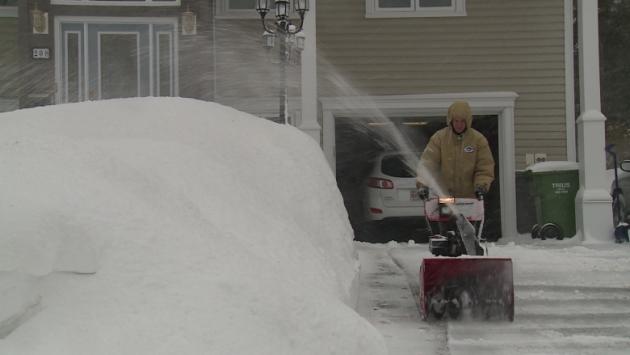 CBC
Nova Scotia's famous groundhog prognosticator Shubenacadie Sam is waiting to make his annual prediction Monday morning, but there's no shadow of a doubt that the Maritimes will be hit with another major storm.

CBC meteorologist Peter Coade said this storm is expected to be Nova Scotia's worst of the season so far.

"It will be moving into the Maritimes early Monday afternoon in southwestern Nova Scotia and southeast New Brunswick. Then, it will spread throughout the entire area by the evening hours," he said.

Western Nova Scotia will be hardest hit, Coade said, with between 20 and 30 centimetres of snow. The storm could track inland over Nova Scotia, which will temper snowfalls slightly.

"There's a good possibility the snow will be changing into a mix of freezing rain or rain along the Atlantic coast, particularly in the eastern areas," he said. Coade said he expected the rain in Nova Scotia to total 25 to 40 millimetres.

The storm will also bring strong winds and blizzard–like conditions.
New Brunswick is expected to fare a little better in the storm, Coade said. In Fredericton, between 15 and 20 centimetres is expected.
Posted by Buzzcanadalive at 9:45 PM