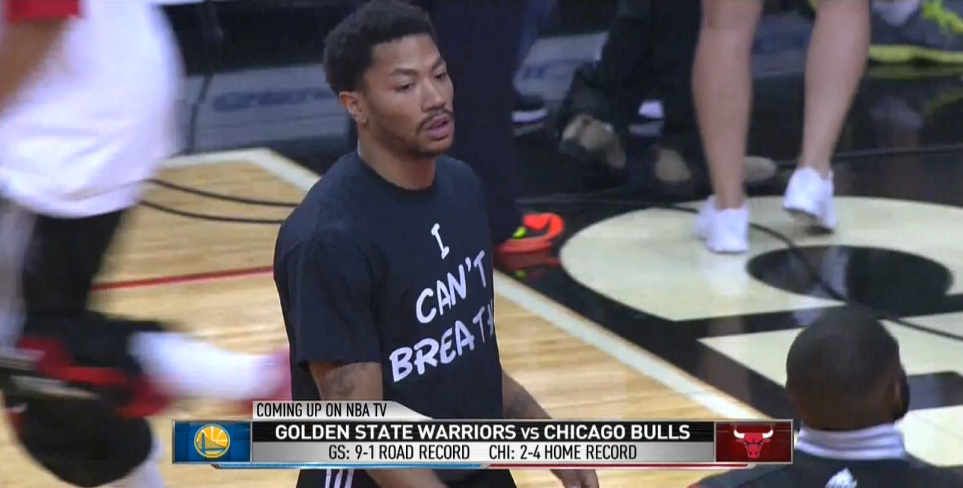 Andrew Hart | Huff
Chicago Bulls point guard Derrick Rose warmed up for his game against the Golden State Warriors on Saturday night wearing a T-shirt with the words "I can't breathe," paying tribute to Eric Garner, the unarmed black man killed by a police officer's chokehold in New York.

In a video of Garner's arrest for selling untaxed cigarettes, the 43-year-old can be heard repeating "I can't breathe" until his body goes limp. The phrase has become a rallying cry for those protesting abusive police tactics and how law enforcement treats black people.

A grand jury in Staten Island voted Wednesday not to indict New York City police officer Daniel Pantaleo in the death of Garner. The decision came the week after a grand jury decided to not indict Ferguson police officer Darren Wilson for the killing of black 18-year-old Michael Brown.

This isn't the first instance of professional athletes using this form of protest. Last month, five St. Louis Rams players entered the field with their hands raised as a form of surrender. Some witnesses said Michael Brown had his hands up when shot, and the gesture, along with the phrase "Hands up, don't shoot," has been embraced by demonstrators nationwide.
Posted by Buzzcanadalive at 7:30 AM