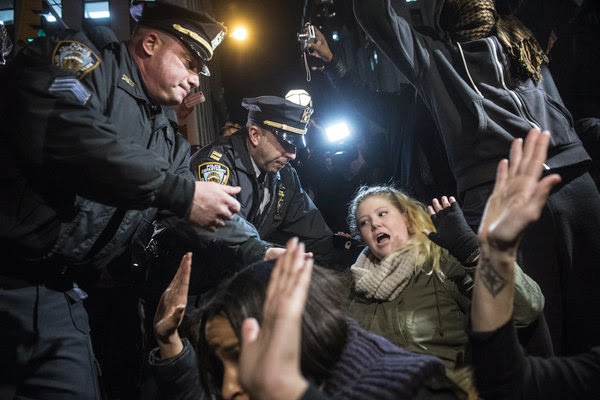 Protests After Grand Jury in Eric Garner Chokehold Case Doesn’t Indict Officer. A Staten Island grand jury on Wednesday ended the criminal case against a white New York police officer whose chokehold on an unarmed black man led to the man’s death, a decision that drew condemnation from many elected officials and touched off a wave of angry but generally peaceful protests.

The fatal encounter in July was captured on videos seen around the world. But after viewing the footage and hearing from witnesses, including the officer who used the chokehold, the jurors deliberated for less than day before deciding that there was not enough evidence to go forward with charges against the officer, Daniel Pantaleo, 29, in the death of the man, Eric Garner, 43.

Officer Pantaleo appeared before the grand jury on Nov. 21, testifying that he did not intend to choke Mr. Garner. He described the manoeuver as a wrestling move,adding that he never thought Mr. Garner was in mortal dange
Posted by Buzzcanadalive at 11:30 AM