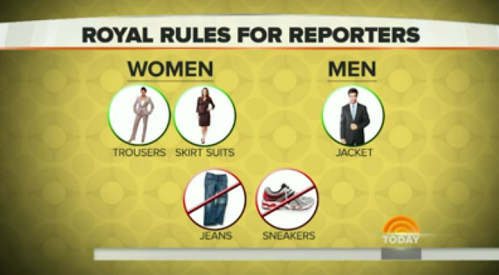 Buckingham Palace has issued a ridiculous dress code to American journalists (who are known for dressing down) who want to cover Prince William and Duchess Kate's visit to the US this weekend.

The royal couple are expected to visit the USA on December 7 and 8 and are rumoured to be meeting Jay-Z and Beyoncé at a basketball game. The Duke will then travel alone to Washington to attend an anti-corruption conference at the World Bank.

Palace guidelines state that journalists should wear smart attire at all times "out of respect" and warns that "casually dressed members of the media will be turned away".
US journalists don't seem to be finding it funny though. Lol. See what they're saying after the cut..
New York magazine asked:

"Why should the United States' press corps — who barely bother to brush the muffin crumbs off their polo shirts before lobbing questions at the President of the United States — schlep extra pieces of clothing to work just so they can make small talk with a (perfectly nice-seeming) British air ambulance pilot-in-training and a former chain-store accessories buyer?"

"Our much more refined brothers across the pond are apparently worried that the American press corps, with our pride of the haggard and ill-dressed journalists, won’t be appropriately attired when interacting with the royals."‎

Email ThisBlogThis!Share to TwitterShare to FacebookShare to Pinterest
Labels: Caption This, Dress, Hilarious, Journalists, UK, US