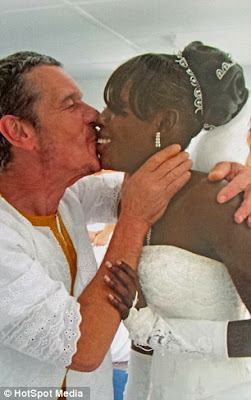 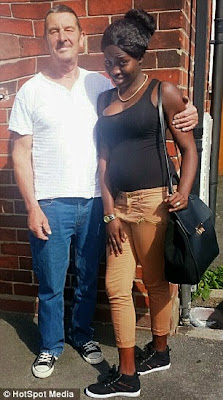 A married couple born 32 years apart have proved that age is irrelevant when it comes to love.

Father of seven Thomas Bolton, 56, shocked his family by returning from a fishing holiday, with an unusual catch - a bride more than three decades his junior.

Mr Bolton fell 'hook line and sinker' for Jainaba Sawo, 24, during the trip with his brothers in Gambia - with the pair tying the knot just three weeks later.

Despite concerns from Mr Bolton's family that Jainaba was 'just after a visa', the husband and wife have been happily married for three years and now have a 17-month-old son, Malang.

Jainaba and Thomas first met in December 2011 in Tallinding, Serrekunda in western Gambia, while Thomas was holidaying with his brothers.

The joiner, from Accrington, Lancashire, said: 'I went to Gambia on a fishing trip with my brothers and came back with a wife. It was very unexpected, but I'm so happy.

'I had finished an afternoon of fishing and was walking along the Kotu beach when I spotted Jainaba sunbathing.'


The couple started chatting and hit it off straight away, and four days later, Thomas had already met Jainaba's family, declaring his love for her and their intentions to marry.

Jainaba said: 'My family welcomed Thomas and thought of him as their son. My mum Binta, 47, was wary at first because he was a stranger, but she could see how much he cared for me.

'At first my family were worried that I was getting married too quickly, but they said it was my decision, and that they'd stand by me either way.'

Less than three weeks later in January 2012, the pair married in Jainaba's hometown, Tallingding, in a small ceremony.
Jainaba said: 'Thomas's friends and family didn't come to the wedding, which I think upset Thomas, but the wedding wasn't planned in advance so it was really difficult for them.'


The same day, Thomas converted to Islam to show his dedication to his new wife and now prays daily.

The couple's whirlwind romance was cut short as Thomas' holiday came to an end and he was forced to return to the UK.

Their relationship remained long distance until September 2012 when Jainaba finally finished the necessary paperwork and exam to be granted entry to the UK.

Despite initial reservations from Thomas's family about Jainaba's intentions, their first child together, Malang, was born in June 2013.

Jainaba said: 'I'm younger than most of Thomas's children, whose ages range from 22 to 39, so naturally they were suspicious at first but now they've accepted me.

'They said the age gap would give us problems, but no one knows where love comes from. I love how Thomas treats me - he's so romantic and often surprises me with flowers and perfume. He's my hero.

'The most difficult thing about living in England has actually been living away from my friends and family, especially my mum.'

Thomas, whose ex-wife died four years ago after suffering from pancreatic cancer, said his friends are jealous of his marriage to a younger bride.

He said: 'All my friends want a younger wife now.

'I don't believe there should be a stigma with age gap relationships as Jainaba and I have had no problems in our relationship. She's more mature than most people her age.'

The loved-up couple are hoping to have a second baby in the future
Posted by Buzzcanadalive at 5:00 PM