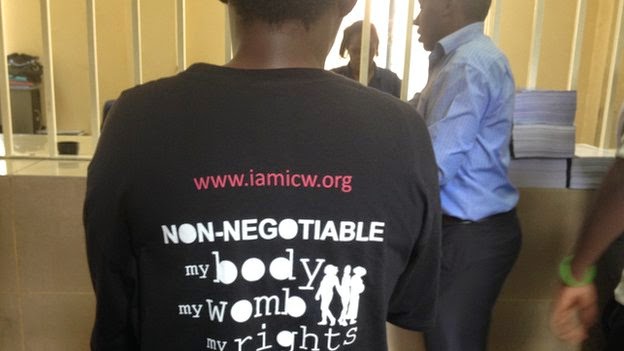 A group of HIV-positive women in Kenya has taken legal action against the government, accusing it of arranging for them to be forcibly sterilised.

The five women are demanding compensation from the government and the non-governmental organisations they say carried out the sterilisations.

Activists protested in the capital, Nairobi, to call for the practice to be banned, claiming it was widespread.

The government has not yet commented on their allegations.


One of the women, Teresia Otieno, told the BBC that she was sterilised without her consent.
"I went in for an operation to give birth to my first child. By the time I was leaving the operation the doctor told me I had been sterilised," Ms Otieno said.

The women are demanding financial compensation. The women marched from Nairobi's High Court to Uhuru Park with T-shirts bearing the words: "Enforced and coerced sterilization of women living with HIV".

Lawyer Allan Machele said the reproductive rights of the women had been breached, along with their right to dignity.

"When you sterilise women who are living with HIV, you have violated their rights," he added.

In 2012, a court in Namibia ruled that three HIV-positive women had been sterilised without their consent.

The case had been brought by three women who opted to have Caesarean deliveries to reduce the risk of passing the Aids virus to their babies.

Health officials had denied that the women had been forcibly sterilised.

BBC
Posted by Buzzcanadalive at 11:00 PM