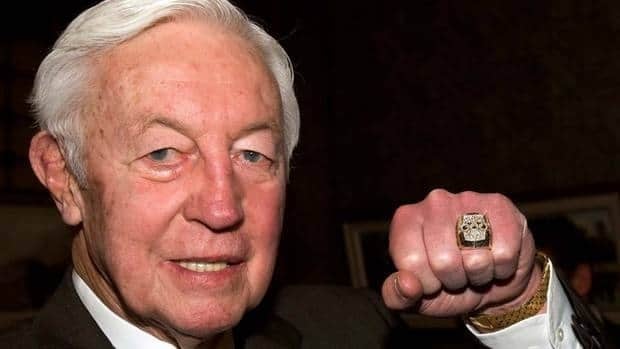 Bill Beacon, The Canadian Press
It is hard to imagine a classier hockey player, on and off the ice, than Jean Beliveau.

A supremely skilled centre for 18 seasons for the Montreal Canadiens, the 83-year-old Beliveau was also a gracious spokesman for the team and the sport.

With his death confirmed late Tuesday by a spokesman for the Canadiens, the NHL club lost the man who embodied all the attributes of their dynasty teams of the 1950s, 1960s and 1970s — talent, flair, intelligence and success.

He scored 507 goals, won 10 Stanley Cups and was captain for 10 seasons before his retirement in 1971, then moved seamlessly into an executive position with the club.

Words like class and gentleman were attached to Beliveau by virtually everyone who met him.

"Meeting him is not like meeting other stars from the old days," said Beliveau’s former linemate Gilles Tremblay.

Canadiens fans who revered Beliveau were given a scare in 2000 when he was diagnosed with throat cancer, but after losing 30 pounds during treatment and enduring "the worst period of my life," he recovered and was soon back in his familiar spot — attending nearly every home game with his wife Elise in the seats among the fans. He also survived a stroke in 2012.

Such was his spotless image, Beliveau turned down an offer from prime minister Brian Mulroney in the 1980s to sit in the Senate and refused an offer extended by prime minister Jean Chretien in 1994 to become Canada’s governor general.

Even the crafty handling of his first professional contract in the early 1950s, when he landed a comparatively enormous salary that averaged more than $20,000 as an unproven rookie, didn't tarnish his public appeal.

A resigned general manager Frank Selke Sr., when asked what it took to sign Beliveau, simply said: "All I did was open up the Forum vault and say: 'Help yourself, Jean.'"

The signing had been ordered by the Canadiens owners, who had bought the entire Quebec Senior Hockey League to secure the rights to the quiet, six-foot-three centre for the Quebec Aces.

And the esteem in which he was held, inside and outside hockey, was not the result of a cynically nurtured persona. Those closest to him insist the graciousness was genuine.
Posted by Buzzcanadalive at 1:00 PM