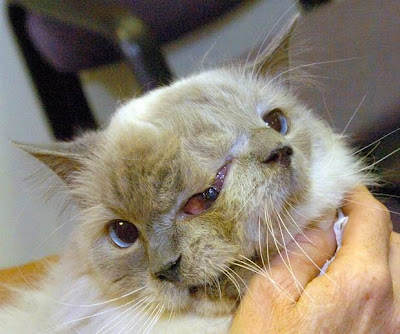 ADAM WITHNAL | INdependent
The world’s oldest two-faced cat has died of cancer, after defying veterinary science to reach the ripe old age of 15.

Named Frank and Louie – or “Frankenlouie” for short – the animal was declared the longest-surviving two-faced cat on the planet when he was entered into the 2012 edition of Guinness World Records.

Born with three eyes, two noses and two mouths, Frank and Louie belonged to a group known as Janus cats, named after the Roman god.

Janus cats suffer from a rare congenital disorder known as craniofacial duplication, the result of hyperactivity from the protein that governs facial development in foetuses. They almost never survive, usually through difficulties with the development of the oesophagus.

Speaking to the Telegram of Worcester in Massachusetts, Frank and Louie’s owner Martha Stevens said he was put down after his condition deteriorated over Thanksgiving.


Ms Stevens said vets told her the cat was in pain and likely suffering from “really bad cancer”, the newspaper reported.

Though his central eye did not function, he had no bottom jaw on “Louie’s” side and only “Frank’s” side was capable of taking food, Frank and Louie lived like any other cat and beyond the life expectancy of the average feline.

Ms Stevens said he was a very friendly cat who would always win round those initially put off but his appearance. And while she was still “devastated” by his death, she told the Telegram she’d happily adopt another Janus cat, despite the odds against their survival.
Posted by Buzzcanadalive at 6:00 AM