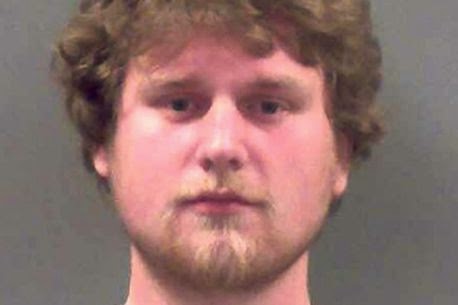 A son who chopped up his dad and used his body parts as TV stand has been convicted of murder. Nathan Robinson has been warned he faces life in prison following his conviction for the brutal murder.

Nathan Robinson, 27, was told he faces a life sentence after putting William Spiller’s body parts in storage boxes and using them as a stand for his TV.

Robinson shared a flat with his 48-year-old father, Winchester crown court was told.
Judge Mr Justice Griffith Williams said: “There is only one sentence I can pass on you and that is one of life imprisonment.

"I won’t pass that sentence now as I want to consider the minimum sentence you will serve.”

After the murder, Robinson steam-cleaned the flat in Bournemouth, Dorset, but a neighbour below became suspicious when pink droplets began appearing on walls.

The following day, the University of Aberystwyth mathematics graduate set off for a weekend away to visit friends in Glasgow with a box-set of Saw horror films in his black holdall, a court heard.

Before leaving the flat he shared with his 48-year-old father, Robinson, of Kingswinford, West Midlands, set about cleaning up his crime.

In the following month, he then covered his tracks by using his father’s mobile phone, sending text messages posing as the 6ft 4in, 25-stone Mr Spiller.

Robinson denied murdering his father on May 16 last year but admitted manslaughter on the grounds of diminished responsibility.

During the trial, he claimed his father sexually abused him in a hotel as a 13-year-old boy.
He alleged he forgot all about the abuse but the memories flooded back to him in early 2013, a court heard.

Robinson was arrested weeks after the murder on June 18 last year - telling police ‘Is this a joke?’ - a day after Mr Spiller’s girlfriend Glenys Molyneux reported her taxi driver partner missing to police.

Mr Spiller was identified by dental records as the body was so decomposed.A date for his sentencing is yet to be set.