Loblaw to buy Shoppers Drug Mart for $12.4B 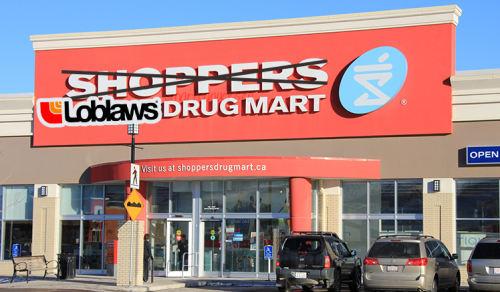 The merger of Canada's largest grocery retailer, Loblaw, and the country's biggest pharmacy chain, Shoppers Drug Mart, will not reduce competition and customer choice as some fear, Loblaw executive chairman Galen G. Weston assured customers at a press conference in Brampton, Ont., Monday.
"This is a transaction about two complementary businesses," Weston said. "This is not an overlapping, scaling-up transaction when you really get into the detail."
In a deal that the two companies say will change the retail landscape in Canada, Loblaw has agreed to buy Shoppers Drug Mart for $12.4 billion.
Toronto-based Loblaw will acquire all outstanding common shares in Shoppers, gaining some 1,200 drug stores in all provinces — many of them small locations in urban markets — in return for cash and Loblaw shares.
The Weston family has agreed to subscribe for additional Loblaw shares but its ownership will be diluted from a stake of about 63 per cent now to 46 per cent after the deal is completed.
Loblaw shares were up more than eight per cent on news of the deal and were trading at $51.54 midday Monday on the Toronto Stock Exchange. Shoppers shares were up almost 27 per cent and trading at $61.33.
The deal must still be approved by shareholders and the Competition Bureau.

Rather than cutting into each other's market share, the deal will allow the two companies to play on each other's strengths, Weston said.
Shoppers has about $1 billion in food sales annually, he said, versus Loblaw's $30 billion. But Loblaw's share of the pharmacy market is only five per cent, so adding Shoppers health products and services to its grocery stores will allow the food retailer to expand its services in what it sees as a growing sector: health, wellness and nutrition.
It'll also allow Loblaw to increase its presence in urban areas and respond to what Weston sees as a growing need for smaller stores that offer a broad range of products and are easily accessible in densely populated urban areas.
The almost 100-year-old Loblaw chain is great at providing one-stop shopping in large-format stores, he said, but will benefit from the large network of smaller Shoppers stores in Canada's cities.
"This [deal] is a response to what we see as the most important consumer trends: health and wellness and small stores," the Loblaw chairman said.
Loblaw made its first move into health-product retailing last week when it opened a pilot store in Toronto called Nutshell Live Life Well aimed at upmarket, health-conscious consumers.
At the Monday press conference Weston said that if the merger goes ahead, Loblaw will start carrying certain Shoppers health product brands, including the Life brand.
He rejected suggestions that with the current expansion of its business, Loblaw is becoming the Wal-Mart of Canada, saying that diversification has been a part of the company's core strategy for 35 years. Over the years, Loblaw has added banking (President's Choice Financial), clothing (Joe Fresh) and discount groceries (No Frills) to its core business and the addition of drug stores complements that expanding portfolio and is in line with the company's planned growth strategy, Weston said.

Shoppers Drug Mart will keep its name and operate as a separate company while adding certain Loblaw products to its shelves.
The pharmacy chain has been expanding its range of food products and the merger will allow it to keep growing in this area, especially in the area of fresh food, where it has limited offerings, Shoppers CEO Dominic Pilla said.
Shoppers will gain access to Loblaw's vast network of food suppliers and will start carrying its President's Choice brand of food products.
"They have a lot of capability and knowledge that we don't have," he said of the food expertise Loblaw will bring to the pharmacy chain.
Loblaw in turn will get access to the Shoppers customer loyalty program, which is widely seen as one of the most successful in Canada. Although Pilla said his company hopes to learn from Loblaw's expansion of loyalty services to mobile devices, an area that Shoppers has not yet fully exploited, and from its integration of its loyalty program and its financial services arm.
The integration of the companies' loyalty programs will provide the two with a vast knowledge base of consumers' buying habits and provide economies of scale — which, the companies estimate, will translate into savings of about $300 million annually by the third year of the merger, the company executives said.
"We both realized we have the same objectives. We know how to change the game for Canadian retailers," Pilla said of the deal. "We strongly feel that now is the time and this is the deal."

No layoffs or store closures

No stores will be closed as a result of the merger and no front-line workers will lose their jobs, the executives said.
Weston told reporters on Monday that the deal happened very quickly and that he made the initial offer to Shoppers after driving out to a strategic meeting of Shoppers executives early Thursday morning and meeting with Shoppers chairman Holger Kluge "in a van on a country road."
The Loblaw-Shoppers merger comes as supermarkets face mounting competition from giant discount retailers such as Wal-Mart and Target, which also offer groceries.
The Sobeys grocery chain last month reached a deal to buy more than 200 Safeway stores in Western Canada for $5.8 billion, a deal it expects will save $200 million in costs annually within three years.

Using the Friday closing price, the offer is worth $61.54 per Shoppers Drug Mart common share. That's about 29 per cent above the recent average trading price for the Shoppers stock.
The agreed price consists of about 53.9 per cent cash and 46.1 per cent Loblaw common shares, the companies said. Shoppers shareholders can choose whether to get $61.54 in cash or 1.29417 Loblaw common shares plus $0.01 cash for each Shoppers Drug Mart share held.
The amount of cash to be paid by Loblaw will be capped at $6.7 billion and the maximum number of Loblaw common shares to be issued will be about 119.9 million, the release said.
The takeover is the largest in Canada since last summer's Nexen deal.
Shoppers shareholders will see "significant and immediate value," chief executive Domenic Pilla said in a statement.
Loblaw is paying about 10.29 times earnings before interest, taxes, depreciation and amortization, Bloomberg News reported, compared with a median of more 6.15 times Ebitda on similar deals.
Retail analysts said they liked the long-term potential of the deal, which would benefit from the aging Canadian population, which would translated into increased demand for pharmaceuticals and health-related products. CANADIAN PRESS
Posted by Buzzcanadalive at 2:21 PM

Email ThisBlogThis!Share to TwitterShare to FacebookShare to Pinterest
Labels: Across Canada