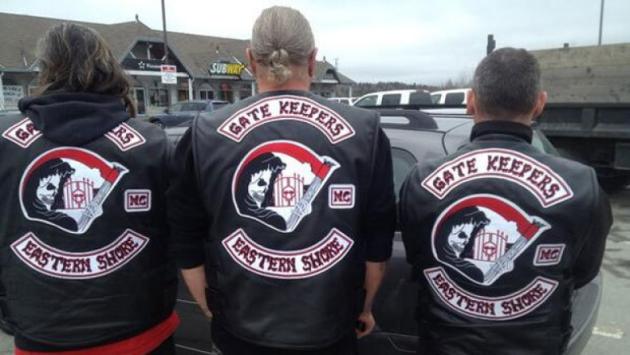 CBC Reportage
In Atlantic Canada, the Bacchus outlaw motorcycle club runs the drug trade, according to police biker crime specialists. In oil-rich Alberta, bullets fly when the Red Scorpions clash with the United Nations crew. In the Prairies, the White Boy Posse's migration east from Edmonton has spilled blood in Saskatchewan.
Gang activity even blights Ottawa, one of the world's safest cities.
The capital logged a record 49 shootings in 2014, prompting police to address concerns about gangland disputes. Among those incidents was a targeted Boxing Day shooting that wounded one man during what investigators called "infighting" between members of the Crips.
Although Canada's crime rate is trending down, organized crime hotspots still seethe — often outside the urban hubs of Toronto, Montreal and Vancouver.


Saskatoon averaged two gang-related homicides a year between 2003 and 2012, according to Statistics Canada. Its annual average rate of 0.89 gang-related murders per 100,000 population more than doubles the per capita rates in Montreal, Toronto and Calgary.
"Let's not put blinders on and think this isn't happening in our smaller cities," said Toronto author Jeff Pearce, whose 2009 book Gangs in Canada is used as a textbook in B.C. criminology courses.
Whether it's Alberta's oil or Saskatchewan's potash, boomtowns are not immune.
Abdullahi Ahmed was shot dead in Calgary on New Year's Eve, raising fears he was the latest among dozens from Toronto's Somali community to die in Alberta gang violence.
Biker clubs, mafias, aboriginal gangs, cartel affiliates, race-based groups and street-level gangbangers often follow the money, says Keiron McConnell, an organized crime expert who teaches criminology at Kwantlen Polytechnic University in Surrey, B.C.
"You name it, it's there. You go from Halifax to Vancouver, you're going to see a complete diversity," he says.
Membership fluid
However, tracking active gang membership is a trickier matter. Nahanni Pollard, a criminology professor at B.C.'s Douglas College, said "gangs" are loosely defined, and are often fluid groups.
"Some of the gang crime may spill over into other areas, making the geographic determination of whose crime it is difficult," she says.
North Preston's Finest, a criminal faction in Halifax, has brought its sex trafficking enterprise to Toronto, for example, say police.
And in Yukon and Northwest Territories, the 856 Gang were previously dismissed as little more than "punk teenagers" before re-emerging in Yellowknife with a stash of cash, drugs and a gun.
The latest national figures cited by Public Safety Canada date back to 2002. They put the number of "youth gangs" at 434, representing some 7,000 members. Ontario harboured the most youth gangsters with 3,320; Saskatchewan followed with 1,315 gang members.
Tallying murders is simpler.
Abbotsford-Mission in B.C.'s Fraser Valley takes the title of gangland murder capital of Canada. It averaged 1.02 gang-related slayings per 100,000 population between 2003 and 2012, a figure likely elevated by 11 mostly gang-related murders in 2009.
"Abbotsford was a very rural farming community, so this was shocking," McConnell said of the Lower Mainland city that spawned the Red Scorpions, once led by the notorious Bacon brothers. "Police created a gang unit, which was a big deal for a small town."
In 2013, Vancouver recorded the most gang-related homicides, with 18 slayings. Stats Can ranked Montreal next with 16 victims, and there were 14 in Toronto, four in Winnipeg and three in Edmonton.
Outlaw motorcycle clubs such as the Hells Angels run official clubhouses across Canada. Police say Hells Angels-linked "puppet clubs" such as the Gate Keepers have tried to stake their claim over Nova Scotia.
Detective Sergeant Len Isnor, who leads the Ontario Provincial Police's biker enforcement unit, says around 450 Hells Angels operate in Canada, and about one-third call Ontario home. Quebec and B.C. boast about 100 members each, he said, with "rapid expansion" in Alberta and Saskatchewan, where oil and potash money means disposable income for drugs.
"The Hells dominate nearly every province in the country," says Isnor, who has studied the cross-country movements of the Hells Angels for 20 years.
But a potential rivalry could be brewing.
"The Atlantic belongs to the Bacchus. They're big there," he says.
Isnor warned that Ontario's Red Devils, once the oldest club in Canada, have "patched over" as of November to become Bacchus riders, extending the Maritimes-based club's reach westward.
"It's a big game-changer that gives the Bacchus a foothold in Ontario — something the Hells had not expected," Isnor said.
Regional rivals
Most gangs will not match the level of infamy achieved by the Hells Angels, but they nevertheless inspire fear regionally.
"In B.C., you had the Red Scorpions, the Surrey Six, the Punjabi gangs that were infamous, involving Bal Buttar, the UN gang," says Pearce, who interviewed ex-gang members, community workers and police across the country for Gangs in Canada.
"Then you get to Calgary, and it's Asian gangs like the FOB, their rivals the FK, and in Winnipeg you have, by and large, aboriginal youth gangs."
A 2014 Winnipeg Police Service report described the city as Canada's "aboriginal street gang capital," with an estimated 1,400-1,500 active gang members in groups like the Mad Cowz and the Native Syndicate.
Elsewhere, the face of some mid-level gangs is changing. Many B.C. gangs are now multiethnic, putting aside race for profits.
"It's a mix of people — white, brown, black, Asian — all working together in co-operative gangs. They'll do business with anybody," says filmmaker Mani Amar, who interviewed Vancouver South Asian gangsters such as Bal Buttar, who had admitted to a string of gangland hits, for his 2009 documentary A Warrior's Religion.
The UN Gang, a reference to its racial inclusiveness, serves as a prime example.
What sounds like a progressive turn, however, shouldn't belie the destruction gangs wreak on communities, Amar said. Particularly when drug profits lead to violence.
Floyd Wiebe became a victims' rights advocate after losing his son, T.J., in a brutal murder in 2003. The 20-year-old was killed after getting involved with Winnipeg's illegal drug trade, which Wiebe blames for luring his son to a violent end.
Wiebe now mentors people trying to exit gang life, championing outreach programs rather than incarceration so at-risk youth can consider alternatives to easy money and deadly crime.
"Nothing stops a bullet like a job," he says, quoting L.A. activist-preacher Gregoy Boyle's anti-gang philosophy.
"No kid wakes up at 13 years old and says, ‘I'm going to be a gang member today,'" Wiebe says. "They might do terrible things, but at the end of the day, they've found themselves there and, often, they don't even know how the hell they got there."

Posted by Buzzcanadalive at 9:35 AM