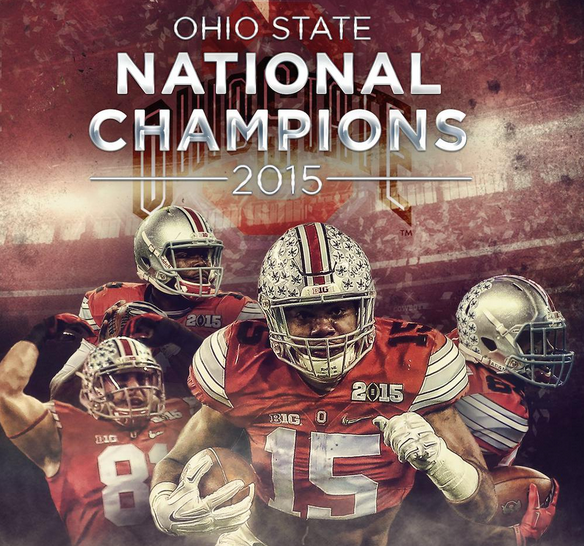 Ohio State was done when Braxton Miller got hurt in August.

Ohio State was done when it lost at home to Virginia Tech in September.

In a season defined by its resiliency, Ohio State wasn't about to let four turnovers stop it from winning the national championship.

Ezekiel Elliott ran for 246 yards and four touchdowns, the defense limited the impact of those giveaways and the Buckeyes rolled to an impressive 42-20 victory over Oregon in the first ever College Football Playoff  National Championship.

Ohio State was done when J.T. Barrett got hurt in November.

A funny thing happened: Every time the Buckeyes looked done, they kept getting better. And in the new era of college football, that was enough to earn a chance to win a championship.

They took advantage of an opportunity they never would have had in the BCS, shrugging off questions about whether they belonged among college football's final four. Cardale Jones, Ezekiel Elliott and the Buckeyes won the first College Football Playoff National Championship Presented by AT&T, upsetting Marcus Mariota and Oregon 42-20 on Monday night.

Behind their bullish backup quarterback Jones and the relentless running of Elliott, the Buckeyes (14-1) completed a remarkable in-season turnaround with a dominating performance against the Ducks (13-2).

"Late August, around camp, everybody counted us out when our Heisman Trophy quarterback went down, and then when the first College Football Playoff rankings came out, we was like No. 16 or 17," Jones said. "Long story short, we weren't supposed to be here."

Ohio State began the first major college football playoff as the fourth and final seed, and was an underdog against both top-seeded Alabama and second-seeded Oregon. Plenty of people thought TCU or Baylor should have had the Buckeyes' spot.
Posted by Buzzcanadalive at 9:30 AM