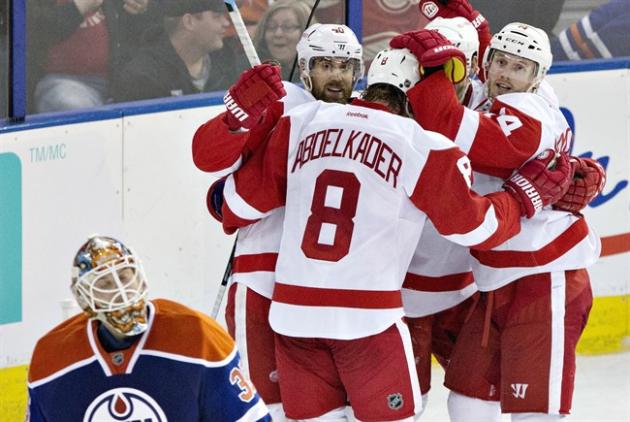 Shane Jones, The Canadian Press
The last thing the Edmonton Oilers can afford to do with the way their season has gone is to gift wrap a game.
Edmonton's Benoit Pouliot took a four-minute spearing penalty in the late stages of a 2-2 game to allow the Detroit Red Wings to score a pair of power-play goals and emerge with a 4-2 victory on Tuesday.
Pouliot wasn't mincing words following a game that he knew cost his team.
"Pretty stupid," he said. "Mostly I just feel bad for the guys because we played hard, we battled back and then I go do something so stupid like that. It's unacceptable.
"It's a 2-2 game, Detroit in town, then I go do that, with three minutes left. It's just stupid.


"I just lost it, I guess and retaliated in a way that I shouldn't have. It's just frustrating. I feel shame, obviously, coming in here after seeing the guys going all out all night, and then I go do something so ridiculous at the end."
Detroit defenceman Kyle Quincey agreed with Pouliot's self assessment of the penalty.
"That wasn't very smart," he said. "We can thank him for that one. That was very timely for us."
Justin Abdelkader had a goal and two assists and Pavel Datyuk scored the game winner and added an assist as the Red Wings won their fourth game in their last six outings.
Quincey and Luke Glendening also scored for the Red Wings (21-10-9), who are 1-1 to start a six-game road trip.
Detroit captain Henrik Zetterberg said he was just glad his team was able to come away with the two points after Pouliot's gaffe.
"On the road in a tight game like this, when you get an opportunity like that, you have to take advantage of it," he said of the late power play. "We took our time, but it was nice to finish it off in regulation."
"Obviously that was good for us," added Red Wings head coach Mike Babcock. "We had the puck for the majority of the night, yet the game was 2-2. That's just how the league is, night in and night out. You have to find a way to win these one-goal type games."
It was Detroit goalie Jimmy Howard's 11th consecutive win over Edmonton, turning away 21 shots.
Jordan Eberle responded with both goals for the Oilers (9-23-9), who have lost 23 of their last 26 games.
Edmonton is, however, 2-1-2 under the sole direction of interim head coach Todd Nelson. Viktor Fasth made 37 saves in net for Edmonton.
"It's one of those things that we have to learn from," Nelson said of the late loss. "Viktor (Fasth) gave us a chance to win, I thought he had a strong game. We got down short-handed and that goal, we put it into our own net. Those things happen, but we have to learn from it and move on. There are a lot of positive things going on, so we have to recharge and get ready for the game on Friday."
Detroit came close to starting the scoring just past the midmark of the first period, but Tomas Tatar's backhand shot on the power play rang off the post behind Fasth.
Edmonton made it 1-0 on a power play of its own with four-and-a-half minutes to play in the opening period as Jeff Petry fed Eberle in front and he lifted the puck into the top corner from an improbable angle to beat Howard, who had robbed him with a big save earlier on the man advantage.
The Red Wings tied the game with nine minutes remaining in the second period as Quincey was allowed to swoop in and get to his own rebound before chipping it past Fasth.
Detroit likely should have gone ahead a couple minutes later as Tatar was all over the Edmonton net, sliding the puck through the crease on one occasion and forcing Fasth to make a couple of massive saves.
The Red Wings kept the pressure up and made it 2-1 with a minute-and-a-half to go in the second period on the power play as Abdelkader tipped a Niklas Kronwall point shot into the Oilers' net for his 10th goal of the season.
Detroit outshot Edmonton 26-15 through 40 minutes.
Fasth kept Edmonton in range until the Oilers tied the game with 4:05 remaining as Ryan Nugent-Hopkins made a nice feed from behind the goal line to catch Eberle in flight, and he scored his ninth goal of the year.
Datsyuk's goal came with just 34 seconds left, as the puck went in off Oilers defender Matt Hendricks during a scramble in front. Detroit added an empty net goal from Glendening.
The Red Wings play the third game of their current six-game road trip on Wednesday in Calgary against the Flames. The Oilers are off until Friday when they welcome the Chicago Blackhawks to town.
Notes — It was the first of two games this season between the Red Wings and Oilers. Detroit came into the game having gone 13-0-1 in their last 14 meetings with the Oilers. Edmonton had two wins in their past 15 games against the Red Wings, each through the shootout. Detroit had also recorded at least a point in 27 of their last 28 games against Edmonton… Oilers 2014 third-overall draft pick Leon Draisaitl will now be on a Western Hockey League contender after having his rights traded from the Prince Albert Raiders to the powerhouse Kelowna Rockets on Tuesday. Draisaitl, 19, was sent back down to junior on Sunday after recording two goals and seven assists in 37 games as a centre for the Oilers this season… Detroit defenceman Xavier Ouellet remains with the team, with Jakub Kindl eligible to come off injured reserve, but not yet ready to play with an elbow injury. Also out for the Wings Jonas Gustavsson (shoulder)… The lone injury for the Oilers is forward Tyler Pitlick who was finally released from hospital in Calgary on Monday after suffering a lacerated spleen and is expected out for three months.
Posted by Buzzcanadalive at 2:30 PM