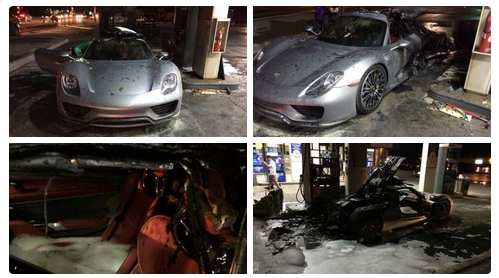 Car fans took to social media to share their heartbreak after photos surfaced of a rare hybrid sports car that was destroyed in a fire on Monday.

Photos of a Porsche belonging to Michael Wekerle, a host of the Canadian television show "Dragons' Den," made the rounds on social media Monday after it caught fire at a gas station in Caledon, Ont.

The Porsche 918 Spyder – a plug-in hybrid sports car which retails for approximately $845,000 US – went up in flames at a station near King and Huronontario Streets on Sunday night.

The rare car is one of only 918 that were manufactured by the luxury car maker in 2013.

A spokesperson for Wekerle confirmed to CTV Toronto in an email Monday that theTV personality's Porsche was destroyed in a "terrible fire."

"The cause of the fire is unknown at this time and is under investigation," Henry Kneiss, of Difference Capital said, adding that no one was injured in the fire.

Images of the burnt Porsche were shared on Twitter and retweeted dozens of times.