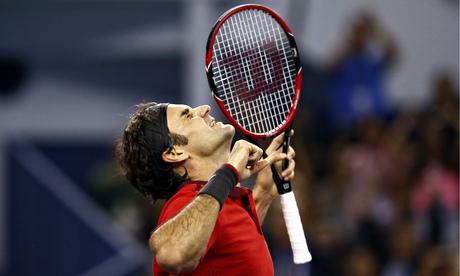 Roger Federer won the Shanghai Masters title as he overcame a determined Gilles Simon 7-6, 7-6 in a tight final in China.

The Frenchman broke in the first game and looked on course for the opening set but Federer broke back and took the tie-break – much to the delight of most of those inside the arena.

Federer, who will move up a place to No2 in the ATP rankings on Monday, was playing the better tennis but the second set also went to a tie-break, and the 17-times grand slam winner wrapped up victory in an hour and 52 minutes.


Simon had the perfect start and silenced the largely Federer-supporting crowd by breaking the Swiss in the first game. The rest of the set went with serve to leave Simon serving to take it but Federer earned himself two break points and while the first one went long, Simon found the net on the second to allow his opponent to level up things.

The 33-year-old easily took the next game and had two set points against the serve but Simon battled back and it went to a tie-break. Both players had mini-breaks but it was Federer who edged ahead and he took the set with a backhand.

Simon called for the trainer at the break but did not look to be in any discomfort as he took the opening game of the set, although that was to be the only game on his serve that he held with ease.

The Frenchman was showing great spirit as he was made to work hard on his serve while providing little resistance against Federer’s. He did mount some pressure in the 12th game and gained two set points against the serve but Federer saw them off and took it to another tie-break.

The second tie-break was far simpler than the first for Federer as a stunning forehand gave him set point and Simon found the net to prompt an almighty roar of celebration from the 17-times grand slam champion.

Posted by Buzzcanadalive at 4:52 PM