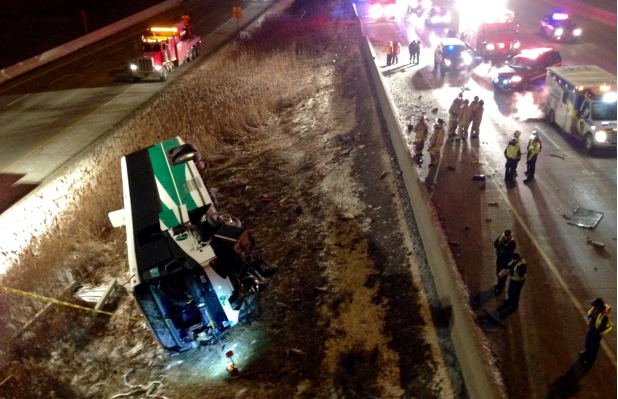 CBC News
One woman is dead and three people were sent to hospital after a GO bus rollover near Weston Road in Vaughan, Ont., on Wednesday.

The single-vehicle crash happened at about 10 p.m.

The bus was travelling east on GO route 47 from Hamilton to York University, according to a tweet from GO.

The Ontario Provincial Police, with cooperation from Metrolinx, the agency responsible for GO Transit, will be investigating what caused the bus to veer off the highway.

Authorities initially believed a male passenger died at the scene, but hours later after lifting the bus, it was revealed that the deceased was a woman.

The driver and two other passengers were sent to hospital, their injuries not considered life-threatening. There were six people on the bus in total, including the driver.

There was no information immediately available as to the ages of the injured or the age and identity of the deceased.

The eastbound Highway 407 ramp to Highway 400 was closed while police investigated the crash. Just after 6:15 a.m., the OPP announced it had reopened.
Posted by Buzzcanadalive at 6:28 AM