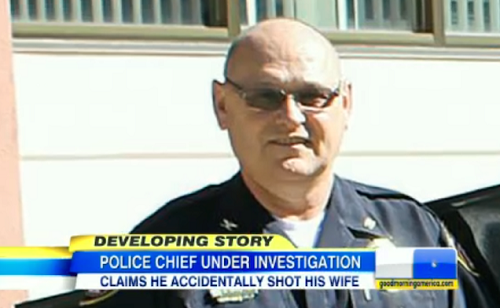 The dramatic 911 call made by a Georgia police chief after he shot his wife has been released — and she can be heard moaning in the background as he calmly explains what happened.

The 4:17 a.m. emergency call, which took place Thursday and was released today, has McCollom on the phone saying how “the gun was in the bed, I went to move it to put it to the side and it went off.”

He does not identify himself for several minutes, and when he does he uses his official title rather than his name. When the operator repeats his title back to him, he says: “Yeah unfortunately yes.”

He told the operator that his 58-year-old wife, identified as Margaret McCollom, was asleep at the time that the gun went off.

“She’s starting to have trouble breathing now so it must be internal,” he said of her bleeding.

“Come on guys, get here,” he is heard saying to the operator about the emergency responders who were on their way during the call.

Luckily for Margaret she made it alive but remains in a critical condition.
Posted by Buzzcanadalive at 7:00 PM