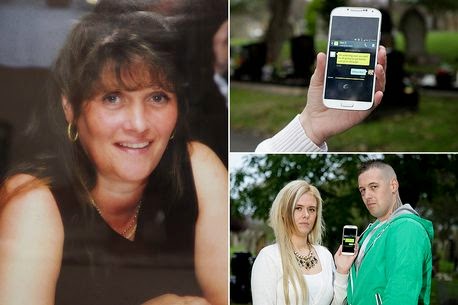 Family who sent texts to mobile buried with late gran get replies 'from beyond grave'. According to the story, 59 year old Lesley Emerson (pictured left) who died from bowel cancer in 2011, was buried with her favorite things, including her phone...and then her family began to receive messages from the phone which they had put in the coffin with her.

Shocked Sheri Emerson received a message from her beloved dead grandma from 'beyond the grave' - after a cruel prankster was given her old number. Lesley Emerson, 59, was buried with her mobile phone because she loved to send her loving family text messages.

Granddaughter Sheri and other close family members continued to 'contact' the dead grandma via SMS as a means of coping with their grief. But a shocked Sheri got a reply telling her: "I'm watching over you, and it's all going to get better. "Just push through."

Lesley's family was assured her number would never be used again.

But, three years after her death, O2 gave her old number to another customer - who answered the messages thinking they were "jokes" from friends.

The new user then turned prankster - and sent a series of replies when he realised his number once belonged to a dead person.

The 22-year-old care worker from South Shields, South Tyneside, said: "I felt sick when I read it, I was in shock, I didn't know what to think.

"I'd sent a message on Wednesday night telling her about family life and then I got the reply on Thursday.

"Obviously we know that nan wasn't going to ever reply, it was just something we did as a comfort for ourselves, because she loved to text.

"So you can imagine what I was thinking seeing a message flash up from her."

Lesley died of bowel cancer in July 2011 and was buried with her favourite things in South Shields Harton Cemetery - including her mobile.

During the last three years, Sheri, along with her father John Emerson, 42, and uncle Graham Emerson, 29, have sent messages to Lesley's mobile for comfort.

Phone giants 02 assured them the number would be terminated forever.

But several messages came through last week, with another telling Sheri "not to worry".

She then sent another message asking who sent the text, to which she received the bizarre reply of: "A disturbing vegetarian".

Sheri added: "The person must have realised what was going on and replied that they were sorry."

Sheri's Uncle John contacted Lesley's phone and spoke to a man who said he'd been using her old number for the last few weeks.
Culled from UK Mirror
Posted by Buzzcanadalive at 11:00 AM