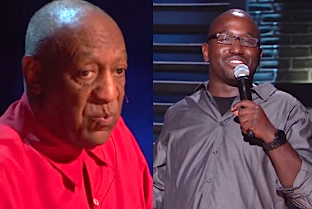 We love Bill Cosby but can't stand trying to disrespect  the legend he is.. And that was exactly what comedian Hannibal Burruss did during his stand up comedy routine in Philadelphia some days ago. The Eric Andre Show co-host, referred to Bill Cosby as a rapist. What he told the crowd below.

"Bill Cosby has the f–ing smuggest old black man public persona that I hate. ‘Pull your pants up, black people. I was on TV in the '80s. I can talk down to you because I had a successful sitcom.’
"Yeah, but you raped women, Bill Cosby. So, it brings you down a couple notches….I don't curse on stage. But yeah, you're a rapist.”

“I want to just at least make it weird for you to watch ‘Cosby Show' reruns. If you don't know about it, trust me. When you leave here, Google ‘Bill Cosby rape.’ That shit has more results than Hannibal Buress.
Posted by Buzzcanadalive at 1:30 PM