The Ebola outbreak in western Africa and the handful of cases that have surfaced in North America and Europe have raised concerns about how infectious the disease is and how to recognize its symptoms.

Dr. Todd Hatchette, director of virology and immunology at Dalhousie University in Halifax, says that when it comes to Ebola, diagnosis can be tricky.

"With flu season coming, there are going to be lots of people presenting with fever and weakness and muscle aches and things. But the key is, where they have been?" says Hatchette.

Even if a person is showing fever-like symptoms and has been to western Africa, Hatchette says, that doesn't necessarily mean an Ebola infection.

"At the present time, most of the people that return from Africa with a fever don't have Ebola — they have something more common, like malaria."

While an Ebola infection may initially have symptoms similar to diseases such as malaria and cholera, there are key distinctions. CBC takes a closer look at how Ebola manifests itself.

How does the Ebola virus affect the body?

The virus infects cells lining the inside of blood vessels, says Hatchette.
"When that happens, fluid leaks from people's blood cells into their tissue and drops their blood pressure and causes problems with getting blood through the organs," he says. As a result, the virus can lead to both clotting and excessive bleeding. 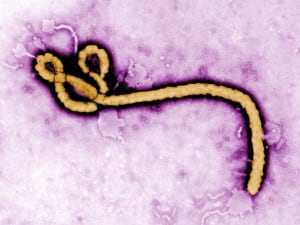 The Ebola virus can attack blood cells as well as immune cells in the body. (Frederick Murphy/CDC/Reuters)
Ebola can also infect some immune cells, and in so doing, set off a reaction in which the body creates infection-fighting chemicals called cytokines in such large quantities that they overwhelm the immune system and infect other parts of the body, such as the liver, spleen and lymph nodes.
According to Dr. Tim Jagatic, who works with Doctors Without Borders, there is a two-to-21-day incubation period — "the time when you have the virus in you but you have no symptoms and are not contagious."
The U.S. Centers for Disease Control reports that the average incubation period is eight to 10 days.
Dr. Michael Gardam, director of infection prevention and control at the University Health Network in Toronto, told CBC News that Ebola is "actually quite hard to catch" and emphasized that "it doesn't transmit before the onset of symptoms."

What are the earliest symptoms?

According to the U.S. Centers for Disease Control, symptoms start to appear in stages.
The early symptoms include sudden onset of fever (greater than 38.6°C), intense weakness, muscle pain, fatigue, headache and sore throat.

What are the later symptoms?

WHO reports that as the infection progresses, it can manifest itself in vomiting, diarrhea, rash, impaired kidney and liver function, and in some cases, internal and external bleeding.
Many people have become preoccupied with reports of Ebola victims bleeding from their eyes and ears, but according to an article published in the New England Journal of Medicine in late September, "unexplained bleeding" was only reported in 18 per cent of Ebola cases in the current western African outbreak.
Hatchette says a patient's physical condition worsens with an increase in diarrhea and vomiting.
"Most of the damage is from the fact that you're losing so much fluid and so many electrolytes that your body can't cope with it, and you end up getting problems with organ failure," says Hatchette.
"It's important to support the care of the patient by replacing these fluids and electrolytes — that's really the primary method of treatment that we have."
According to the U.S. Centers for Disease Control, if an exposed person does not become ill after 21 days, "they will not become sick with Ebola."

How is Ebola diagnosed?

WHO notes that Ebola infections can only be confirmed through laboratory testing.
To do so, scientists look at a patient's blood or samples of diarrhea or vomit to find the RNA, or genetic fingerprint, of Ebola.
CBC
Posted by Buzzcanadalive at 6:00 PM