Chris Brown has taken to his Twitter page this morning to share his thoughts on the Ebola Virus Disease that has been raging in different parts of the world and doing a lot of damage recently.

With over 4000 deaths in West Africa confirmed by the World Health Organization, it is understandable that there has been fear and panic after it was announced that the virus was discovered in the United States a few days ago. 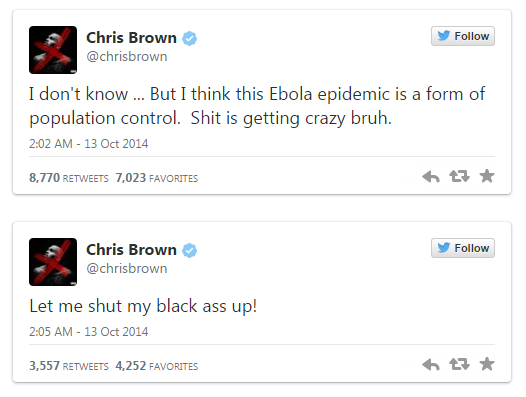 Chris Brown, who just recently put out his “X” album, tweeted: “I don’t know … But I think this Ebola epidemic is a form of population control. Shit is getting crazy bruh.”

He then followed it up with: “Let me shut my black ass up!

Chris Brown is saying that the Ebola virus has been purposefully manufactured and spread in several African countries as a way of reducing populations in the Ebola stricken countries of Liberia, Sierra Leone and more.
Posted by Buzzcanadalive at 8:25 AM