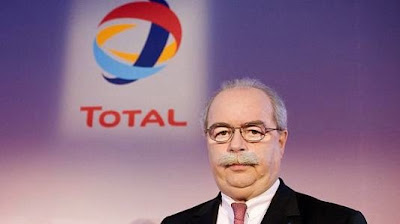 According to a statement released by airport authorities early this morning, de Margerie's private plane collided with a snowplow on the runway of Vnukovo International Airport in Moscow as it was accelerating for takeoff just a few minutes before midnight. They also said in the statement that the driver of the snowplow was intoxicated. The business jet's three crew members also died.

The chief executive who was based in Paris, France had gone t to Russia to attend a meeting of corporate executives with Prime Minister Dmitri A. Medvedev and was returning to Paris when the accident occurred. He is survived by a wife and children. May his soul rest in peace...amen.

Total released a statement on their website this morning, confirming his death. See below


Paris: Total confirms with deep regret and great sadness that Chairman and CEO Christophe de Margerie died just after 10pm (Paris time) on October 20 in a private plane crash at Vnukovo Airport in Moscow, following a collision with a snow removal machine. Four people were found dead at the scene of the accident, including three crew member and Christophe de Margerie. The thoughts of the management and employees of the Group go out to Christophe de Margerie’s wife, children and loved ones as well as to the families of the three other victims.