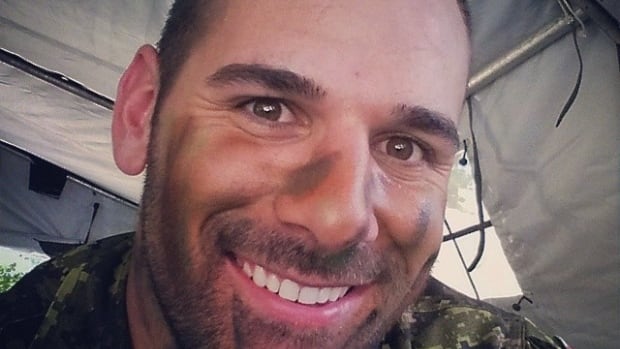 Jeff Green, Adam Carter, Samantha Craggs, CBC News
The opening shots that began a devastating day on Parliament Hill killed a Hamilton reservist who dreamed of being a full-time soldier and deprived his kindergarten-aged son of his father.

Cpl. Nathan Cirillo, 24, was shot while on honorary guard at the National War Memorial. Ottawa Police announced hours after the shooting that the soldier shot at the memorial had died.

He would later be identified as Cirillo, a reservist from Hamilton serving with the Argyll and Sutherland Highlanders of Canada regiment. Cirillo died a short time after the attack despite frantic efforts to revive him at the base of the Tomb of the Unknown Soldier.


Lt.-Col. Lawrence Hatfield of the Argylls made a brief statement on Wednesday night to reporters and members of the public who gathered outside the James Street armoury.

"The regiment wishes to express its sincere condolences to the family of Cpl. Cirillo as well as to express our thanks that's been demonstrated by the support of Canadians across this country," he said. "Cpl. Cirillo was a very proud member of the Argylls and the Highlanders of Canada. Our thoughts and prayers are with his family, and we hope that Canadians share that with us."

Back in East Hamilton, the news spread through his extended the family. A distraught uncle, Jim Cirillo, answered the door to his Barton Street East home with swollen eyes, a TV locked on the 24-hour news cycle of the unfolding events, and a computer opened to a picture of his nephew, Nathan. Between tears, he pointed at the picture on the screen. He said his sister-in-law and mother to Nathan, Kathy, couldn’t believe the news.

“She's saying she doesn't believe it … She went on the internet and she saw it and she … I don't know how she didn't pass out.

Jim Cirillo said Nathan and his two sisters weren't "dealt a good hand," with a difficult divorce splitting up their parents.

"And now for him to get shot and pass away, I don't know if life is fair … he didn't deserve that," he said. "I don't know how someone could have picked him out and do that."
Posted by Buzzcanadalive at 9:00 AM