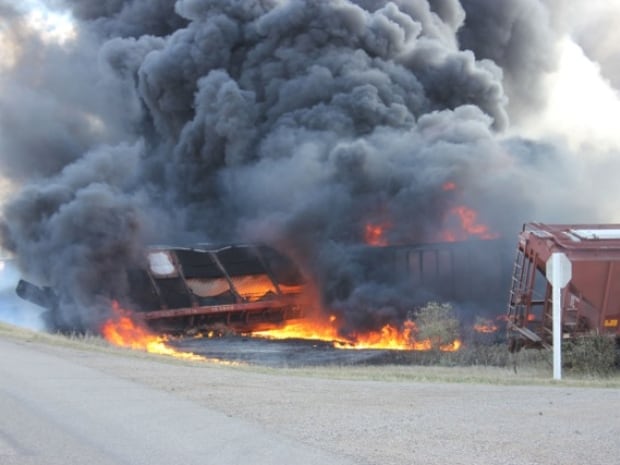 A CN freight train carrying dangerous goods derailed in central Saskatchewan on Tuesday, sending plumes of thick black smoke into the air and displacing residents of a tiny nearby hamlet.

The derailment happened near the community of Clair, which has a population of about 50. Police told those people to leave their homes and also evacuated farms near the scene.

CN spokesman Jim Feeny said the train was made up of three locomotives pulling 100 rail cars and that 26 of them derailed.

He said the fire came from petroleum distillates, which spilled from two of the derailed cars.

The fire had "diminished'' as of Tuesday evening, Feeny said, but was still burning.

Clair is about 190 kilometres east of Saskatoon near the community of Wadena.

Alison Squires, who is the publisher of the Wadena News, went to the fire and said she has never seen anything like it in the 13 years she has lived in the area.


"I've seen derailments, but this is a pretty bad one,'' she said. "You could see ... this huge plume of black smoke. When I got there, there was a small explosion. The smoke is too thick to see what cars are involved.''

She added that there was a detour going north to pass the derailment, but not one going south.

"They are assuming the smoke is toxic,'' she said.

A witness told radio station CKOM that the flames were at least 30 meters high at one point.

"The smoke is blowing from west to east and there is quite a bit of it,'' Peter Baran told the station as he watched the fire from a highway.

Pictures from the scene suggested the derailment took place in a sparsely populated area. They showed the smoke billowing high into the sky.

The Transportation Safety Board said it was deploying a team of investigators to the site. CN sent in a hazardous materials team to clean up the area.

The railway industry has been under increased scrutiny since July 2013, when 47 people died after a train carrying oil derailed and exploded in downtown Lac-Megantic, Que.

Adam Scott, a spokesman for the advocacy group Environmental Defence, said Canada is experiencing a boom in the use of railways to transport petroleum products.

"The freight rail lines actually go right through the centre of almost every major urban centre in the entire country including small towns, communities across the country, so the risk of accidents is significant,'' he said.

"The government has introduced measures, but they don't go nearly far enough in terms of safety.''

He said rail companies are not required to publicly disclose the types of hazardous materials being transported on trains.

"It's unacceptable,'' he said. "The municipalities themselves, the communities have no power, no control, and in this case no information even over what's being run through the rail lines.''

In August, the Transportation Safety Board issued a report into the Lac-Megantic tragedy that called for improved safety measures and cited inadequate oversight by Transport Canada. One of the criticisms brought forward was a lack of inspections.

"I would say that if one wants to ensure safety in moving hazardous goods, one has to have inspectors who are empowered to do the work, that are trained to do more than just check the company's paperwork, and are sufficiently numerous and well-resourced to get out on the ground and see what's going on,'' he said.

"The incident in Saskatchewan today is fortunately not occurring in a large town,'' he said. "But that doesn't excuse the lack of oversight by Transport Canada.''

The Saskatchewan government is providing support to the communities impacted by the derailment.

The Rural Municipality of Lakeview declared a local state of emergency and an operations and reception centre was set up in Wadena to coordinate emergency responses and provide help to evacuees.