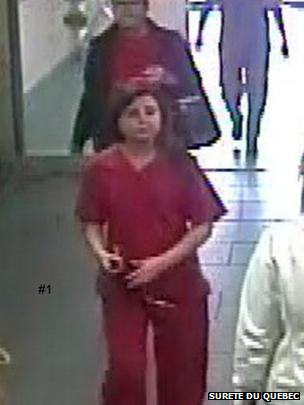 A woman charged with kidnapping a newborn baby from a Quebec hospital in May has pleaded guilty to all charges.

Valerie Poulin-Collins, 21, admitted abduction, kidnapping, shoplifting and drugs possession, and was sentenced to two years in prison less one day.

The woman was accused of entering a Trois-Rivieres hospital room dressed as a nurse on 26 May and leaving with a baby wrapped in a blanket.

An "amber alert" was issued and Poulin-Collins was arrested within hours.

Poulin-Collins was dressed in red hospital scrubs and allegedly took the child by saying she needed to weigh her.

She then drove away in a Toyota Yaris with a "Baby on Board" sign, police say.

Four people in Quebec were hailed as heroes for helping find the stolen baby girl in the hours after her abduction.

Melizanne Bergeron and her sister Sharelle, Marc-Andre Cote and Charlene Plante decided to start looking for the child when they first heard she had been stolen.

They were already in their vehicle when they saw the suspect's photo and description.

"I know her because the police came sometimes," she said.

The four people then went to her home and called police when they saw the car described in the alert.

The baby girl was returned to her parents, Melissa McMahon and Simon Boisclair, within three hours of the alert.
Posted by Buzzcanadalive at 9:30 AM