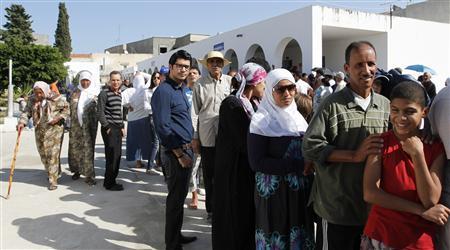 Millions of Tunisians are casting their ballots to directly elect their president for the first time since the revolution four years ago that swept away longtime leader, Zine El Abidine Ben Ali, Al Jazeera reports.

Sunday’s election will be a closely fought contest among stalwarts of the deposed regime, members of the once-outlawed parties, as well as a new breed of politicians that has emerged since the 2011 revolution.

Early voter turnout after the opening of the polling stations at 8am local time (07:00 GMT) was low, especially among the young.

Al Jazeera visited a polling centre at 18 Rue de L’Inde in Lafayette district in downtown Tunis, where the voting process was progressing smoothly.

“As you can see it is a very smooth and calm operation. So far things have been going very well,” Noureddine Jouini, the electoral officer in charge of the polling station, told Al Jazeera.

“Last time in the legislative elections there were a couple of people who couldn’t find their names on the lists even though they had registered. This time the lists have been updated and we have not received any complaints regarding that issue. The youth voter turnout is very low like in the legislative,” Jouini said.

Mohamed Khlil, 78, a retired state official, was among the first to vote in the early hours.

“I came to vote because it’s my country’s fate that we are deciding. I am very happy to be able to vote and make my voice heard,” Khlil told Al Jazeera after casting his vote in the same polling station.

The voters themselves noticed the absence of young people from polling booths.

“It’s clear that young people are still sleeping. I came early in the legislative elections too and it was the same very few young people and queues of old people who are eager to vote. Maybe the young people will come later in the afternoon. I expect the voting process to go very normally,” Olfa Mansour, 50, a high school teacher, told Al Jazeera at the same polling station.

The election has been billed as Tunisia’s first free poll since independence from France in 1956. The vote will also mark the first democratic transfer of power in the country’s modern history.

Some 27 candidates are competing in the race, seen by some analysts as the final brick in the construction of the country’s nearly four years of transition.

In the event that no candidate secures an absolute majority, a second round of voting – pitting the two top candidates against each other – will take place on December 28.

Mohamed Salah Ben Aissa, professor of Public Law at the University of Legal, Political and Social Sciences of Tunis told Al Jazeera that all indications point to a run-off.

“It looks like Beji Caid Essebsi and Moncef Marzouki will respectively get the first and second spot in the first round of the presidential elections,” Professor Ben Aissa said.
Posted by Buzzcanadalive at 5:00 PM