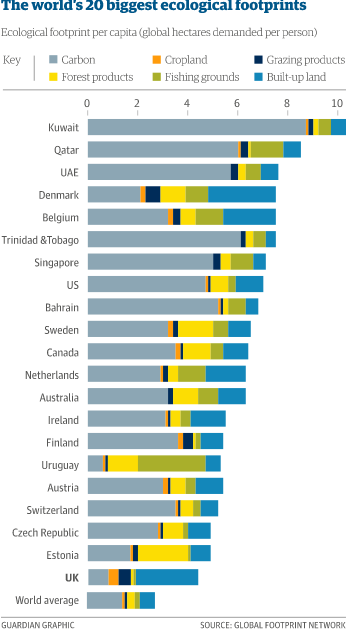 Canada is 11th among world's biggest ecological footprints in recent year. The number of wild animals on Earth has halved in the past 40 years, according to a new analysis. Creatures across land, rivers and the seas are being decimated as humans kill them for food in unsustainable numbers, while polluting or destroying their habitats, the research by scientists at WWF and the Zoological Society of London found.

“If half the animals died in London zoo next week it would be front page news,” said Professor Ken Norris, ZSL’s director of science. “But that is happening in the great outdoors. This damage is not inevitable but a consequence of the way we choose to live.” He said nature, which provides food and clean water and air, was essential for human wellbeing.

“We have lost one half of the animal population and knowing this is driven by human consumption, this is clearly a call to arms and we must act now,” said Mike Barratt, director of science and policy at WWF. He said more of the Earth must be protected from development and deforestation, while food and energy had to be produced sustainably.

The steep decline of animal, fish and bird numbers was calculated by analysing 10,000 different populations, covering 3,000 species in total. This data was then, for the first time, used to create a representative “Living Planet Index” (LPI), reflecting the state of all 45,000 known vertebrates.


“We have all heard of the FTSE 100 index, but we have missed the ultimate indicator, the falling trend of species and ecosystems in the world,” said Professor Jonathan Baillie, ZSL’s director of conservation. “If we get [our response] right, we will have a safe and sustainable way of life for the future,” he said.

If not, he added, the overuse of resources would ultimately lead to conflicts. He said the LPI was an extremely robust indicator and had been adopted by UN’s internationally-agreed Convention on Biological Diversity as key insight into biodiversity.

Guardian
Posted by Buzzcanadalive at 9:00 AM