Ed Mazza | HuffPost
Donald Trump has taken to Twitter to blast the latest Ebola patient in the United States as "reckless" and demand that President Barack Obama resign over his Ebola policies.

Dr. Craig Spencer was diagnosed with the disease on Thursday after reporting symptoms earlier in the day. He had recently returned from Guinea, where he was treating Ebola patients for Doctors Without Borders.

Health officials say Spencer spent much of his time in self-isolation in his apartment. However, he also went on a 3-mile jog, took at least three different subway lines, used an Uber car and went bowling, according to reports.

Trump has repeatedly taken to Twitter and used his media appearances to call on Obama to ban travel from countries with active Ebola cases. He has also repeatedly denounced the president for failing to do s

Trump sent out the following tweet when news broke that Spencer was being tested for the disease: 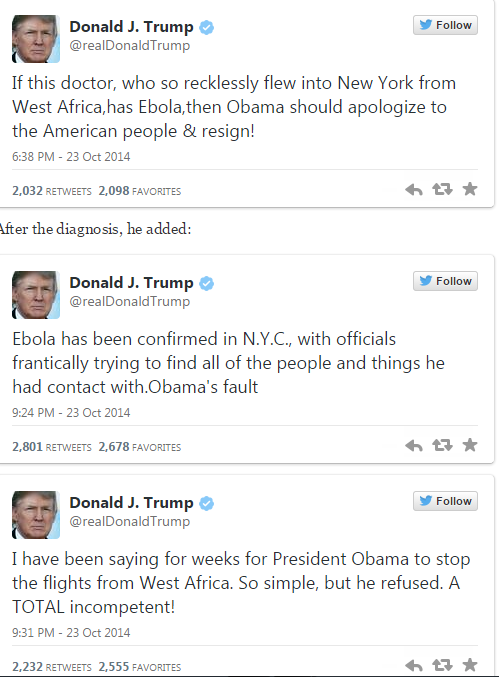 Email ThisBlogThis!Share to TwitterShare to FacebookShare to Pinterest
Labels: Comments, Crisis, Health, US