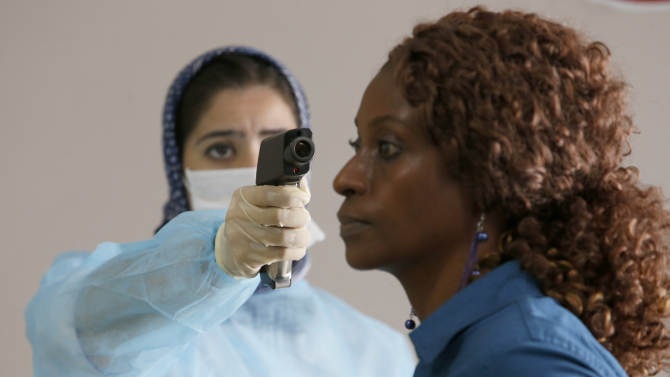 After seven months in Ebola-stricken Liberia, Vijay Kumar was getting his temperature scanned Thursday at the airport by medical crews in blue gowns and masks - one of dozens who relied on Royal Air Maroc's continuing flights to West Africa.

"Of course we are all scared," the cellphone worker said as he and dozens of passengers made their way through the international airport in Casablanca, Morocco. But "we really appreciate their procedures, it's a good system."

He was finally heading home to Chennai, India, relieved that there were still flights operating, after British Airways and Emirates suspended travel to the outbreak countries. Airlines from Morocco, France and Belgium are still flying in and out of West Africa, encouraged by the World Health Organization, because stopping would keep out needed aid workers and supplies - and wouldn't necessarily halt the spread of the disease.

It can take up to 21 days before a person infected with Ebola starts to show symptoms that can be found in airport screening tests. During that period, an individual carrying Ebola can get a flight to anywhere in the world and fall ill later - as happened with a Liberian man who developed Ebola and died in the U.S. this week.


Departing passengers in Africa are being screened. U.S. officials said they will soon start screening arrivals from the affected countries. European governments so far have held off, even though it's conceded infected passengers could arrive undetected. If someone gets sick in Europe, they are hoping to focus on quick response in advanced isolation wards like the one at Frankfurt, Germany's University Clinic - not far from its international airport.

As a major hub for travel to West Africa, Casablanca airport functions as a gateway to the rest of the world. Thursday morning's arrivals board included flights from the Ebola-hit cities of Monrovia, Liberia and Freetown, Sierra Leone, among others. Besides Royal Air Maroc, Air France and Brussels Air also still fly to and from West Africa.

Travel bans aren't the way to go, says a top WHO official.

"You can stop a direct flight, but you can never stop people from moving," either by connecting through other cities or crossing land borders, said Dr. Isabelle Nuttal from the World Health Organization.

The U.N. health agency is not asking countries to have people screened when they arrive on a flight. Nuttal warned that on-arrival screening could lead to a false sense of security, when the key step is that doctors "need to ask people where they have been."

She cited the case of Thomas Eric Duncan, who died Wednesday in Dallas. He passed an airport screening at Monrovia before he flew to Brussels and on to the U.S. because he was not yet showing symptoms. When he did fall ill, he was sent home by a Dallas hospital at first.

Ilham Kazzini, senior vice president with government-owned Royal Air Maroc, said the company is still flying to West Africa because Morocco has an official policy of solidarity with the region.

As the passengers lined up in Casablanca to be scanned by thermal cameras and checked by remote thermometers, they expressed relief that there were still flights. Passengers from West Africa who stay in the country have to give the police contact details, travel plans and are handed a free mobile phone to stay in touch with medical officials.

Passenger John Hyland, who had visited Sierra Leone on a mission for Virginia-based Project Hope, emphasized the importance of not cutting West Africa off from the rest of the world.

"These countries need foodstuffs and all the things they usually import," he said. "If Air Maroc can fly there, why not British Air?"

The airport's chief medical officer, Mohammed Moussif, said they had yet to discover a case of Ebola in months of screenings, but travelers staying in the country must remain in contact.

"By default, we consider all of them to be in the phase of incubation and they are followed up with by a medical team no matter where they are in Morocco, in the north or south, until the end of the incubation period," Moussif said.

U.S. officials say exit screening of about 36,000 people attempting to board airplanes in West Africa showed 74 had a fever and three others had some other symptom that led to them being pulled out of line. That's roughly 1 in 500 people. None are believed to have had Ebola.
Posted by Buzzcanadalive at 2:45 PM