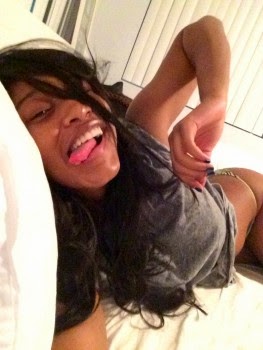 Keke Palmer seems to be the latest target of nude photos being leaked online. Early Friday morning, alleged nudes of the actress made their way to various social media sites.Palmer, 21, who is currently starring on Broadway as Cinderella, has now been added to a list of celebrities—including Rihanna, Jill Scott, Gabrielle Union, Jennifer Lawrence and Kate Upton—who have recently had their privacy violated.

Palmer hasn’t commented on the alleged pictures. But as vocal as she is on Twitter, chances are she will have a lot to say.

The star of Broadway’s Cinderella was on the master list of celebrities who were targeted by hackers, so apparently the picture pilferers are still working on leaking everything that they have in their possession.

According to Gossip Cop, Keke Palmer’s alleged leaked photos were posted on Reddit and 4chan late Thursday night. They feature the actress in various states of undress.
Posted by Buzzcanadalive at 2:30 PM