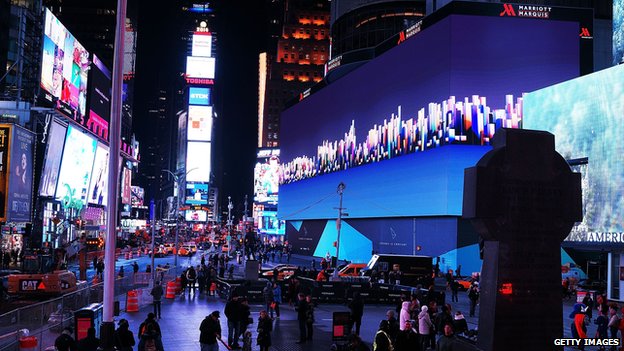 Google has become the first company to rent to the world's largest and most expensive digital billboard in Times Square, New York.

The billboard is eight storeys high and is estimated to cost $2.5m (£1.6m) to hire for four weeks.

The screen, which is the size of a football field, is mounted on the side of the Marriot Marquis hotel.

Around 300,000 pedestrians are estimated to pass by the billboard every day.

Times Square's brightly-lit billboards are some of the most iconic and well-known outdoor advertising spaces.


The new billboard was turned on on Tuesday evening and will show a nature-inspired digital art piece for a week until Google's adverts begin running.

Hundreds of tourists watched as the screen was turned on.

The screen is also connected to cameras, allowing for interactive content.

The US tech giant is reported to have hired the screen until January 2015.