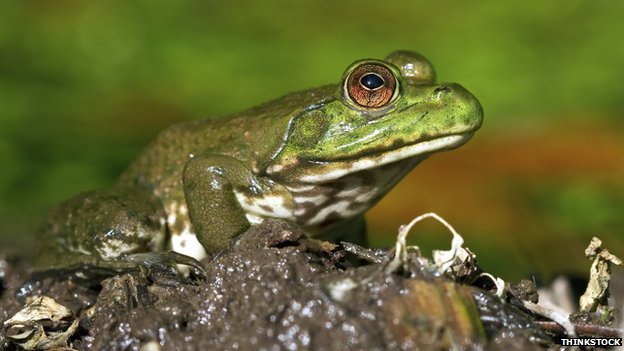 Scientists are reporting an invasion of hungry American bullfrogs along the Yellowstone River in the US state of Montana.

The bullfrogs are said to eat nearly anything, including other bullfrogs, and pose a threat to native species.

The number of the animal's breeding sites has nearly quadrupled since 2010.

Efforts by state and federal agencies to contain the spread of the animals has so far failed, after their numbers proved too great to control.

"They are going to eat anything they can fit into their mounts. It doesn't matter if it's another frog or a bird or a mosquito," US Geological Survey biologist Adam Sepulveda told the Associated Press news agency.

The animals are native to the eastern US but have spread to nearly every state but North Dakota.

The bullfrogs not only eat other frogs, but also compete against various animals for food and spread a fungus believed to cause a significant decline in amphibian populations.

Scientists believe they were released by humans in eastern Montana as pets or tadpoles used by fisherman as bait.

BBC
Posted by Buzzcanadalive at 9:00 PM

Email ThisBlogThis!Share to TwitterShare to FacebookShare to Pinterest
Labels: Animals, Awareness, Random, US