OMG! Man survives being speared by 15-inch piece of wood 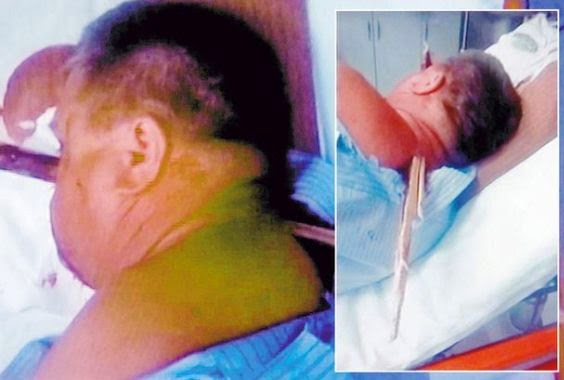 How come? The medical staff at a Polish Emergency ward were surprised when 40 year old Kamil Podwinski calmly walked into their medical centre with a 15inch piece of wood stuck right through his head.

According to New York Post, Mr Podwinski was renovating his home in Konin Poland when the freak accident happened. He reportedly told the nurses he was working when he slipped and fell face first onto a sharp piece of wood. The wood entered his face just below his eye socket and came out through the back of his neck. And he survived. He actually took himself to the hospital.

At the hospital, the staff had to call the fire service department because they'd never dealt with something like that before and were scared they might cause more injury trying to remove the piece of wood out of the man. The fire service arrived the hospital and helped the medical team remove the wood without causing further damage.

The incident has since been described as a miracle as the man who was calm through out the ordeal, didn't suffer serious injuries and is recovering in the hospital.
Posted by Buzzcanadalive at 2:00 AM