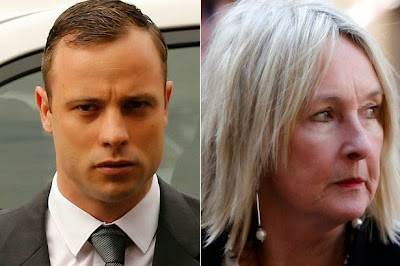 We Have No Choice Than To Receive £340 Monthly From Pistorius,  Says. The mother of Reeva Steenkamp has spoken out to explain why she reluctantly accepted money from her daughter’s killer Oscar Pistorius. June Steenkamp and her husband Barry have received £340 every month from the Paralympic athlete, starting in March 2013 but turned down a lump sum of £21,000 from the sale of his car.

June revealed they were forced to accept the “blood money” after Barry, her father suffered a stroke two months after Reeva was killed. The couple were also evicted from their home when their landlord discovered they were bankrupt.

June said: “We didn’t have much choice. We were in such a bad way, we didn’t even have food on the table. It was that or starve. “I wasn’t happy about it and it did make me uncomfortable. But we are going to pay back every single cent. "That’s how I look at it and live with it now.

“Oscar has made us other offers which we turned down. Thankfully now we are in a position where we can say we don’t want any money from him. "My child was priceless. He can’t buy her life.
Posted by Buzzcanadalive at 11:30 AM