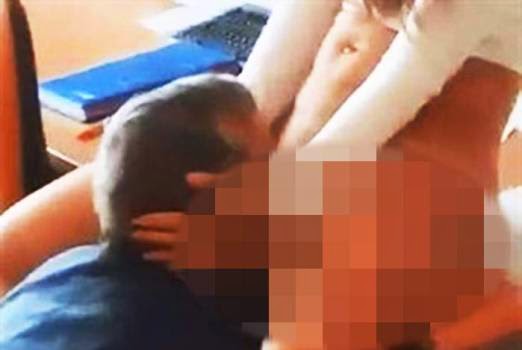 Group of students in a school in Slovenia shared a video online claiming they caught their headmaster giving oral sex to a female maths teacher during school hours.

The 41-year-old headmaster, Drago Kamenik, was allegedly found by students between the legs of 45-year-old teacher, Manja Mertelj after they heard moans of pleasure coming from a classroom that was supposedly empty.

The embarrassed headteacher first threatened to sue the students who uploaded the video on Youtube then later denied it was him after the video went viral in their country.

One of the students said;

‘We heard the noises and knew someone was having sex in there, but we thought it would be other students. We couldn’t believe it when we saw our maths teacher and headmaster.’

The headmaster, who is a married father-of-two, sclaims the video is fake, and says he has reported the clip to police, according to Slovenske Novice.

"The man in the video is not me, it has been photoshopped. I also spoke to my wife. Can these fools even begin to imagine what damage they have caused by doing this?! As for the maths teacher, she is a very good teacher and has had many positive things said about her.’ he said.

Another student called his bluff and said that:

‘We can put up more to prove it but I don’t think anyone really doubts us.'