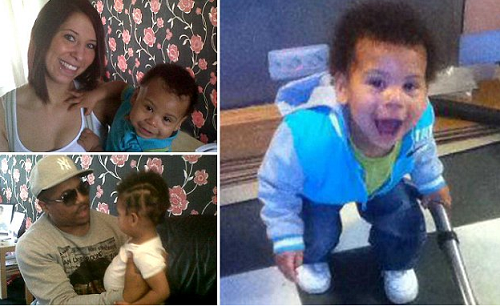 What a cruel world! A mother and father murdered their 22-month-old son by stamping and beating him with such ferocity the child's small intestine split in two, a court heard. Toddler Levi Blu Cassin suffered 'catastrophic' internal injuries similar to someone who had been hit by a car or fallen from a three-storey building.

He died after being discovered by paramedics at his mum's address in Castle Bromwich, Birmingham, on the morning of February 20 last year.

His parents Danielle Cassin, 27, and Mark Piper, 31, are on trial at Birmingham Crown Court charged with murder and child cruelty. The court heard Cassin phoned for an ambulance after her son stopped breathing at around 4.30am on the morning of his death.

Paramedics arrived at the couple's flat to find Levi lying on the floor between the cot and his mother's bed. Prosecutor Timothy Raggatt QC said the child's eyes were open but his lips had turned blue and he had no pulse.

He was rushed to hospital on blue lights but was pronounced dead at around 5.30am. A post-mortem examination revealed Levi died from 'major internal injuries' - with his small intestine split in two - as a result of 'significant' blows to the body.

Mr Raggatt told the court the toddler could have been punched in an upright position several times.But he said the more likely scenario was that Levi was lying on the floor and had been stamped on either once or repeatedly. Mr Raggatt said the only two people who could have inflicted the fatal injuries were the boy's parents.

But the boy’s parents have kept mum on why they did it, or who among them killed their son which is making the case difficult.
Posted by Buzzcanadalive at 8:00 PM