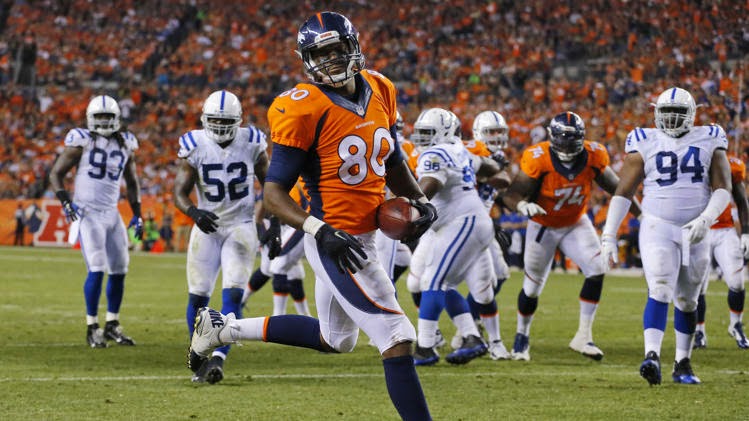 In his second try, Manning beat his old team and joined Brett Favre as the only quarterbacks to beat each of the current 32 NFL franchises.

More heart-pounders like this and Manning will go gray.

The Broncos raced out to a 24-0 lead, a perfect test for GM John Elway's blueprints for returning to the Super Bowl. He spent more than $100 million on a defensive makeover and retooled his offensive line.

The Broncos were unable to close this one out like they wanted, however.

With Welker serving a four-game suspension for violating the NFL's policy on performance-enhancing drugs, the Broncos couldn't convert third downs, going 1 for 7 in the second half after a first half in which they went 6 of 7.

"We've got to find a way to play all four quarters as an offense," Manning said. "Thank goodness the defense picked us up when the offense wasn't doing their job quite as well."

The Broncos fended off a furious comeback attempt by Andrew Luck, who was working wonders behind a patchwork offensive line.

"We did manage to take advantage of some opportunities in the second half that we didn't in the first. It was good to get that two-minute drive right at the end of the half," said Luck, whose 9-yard scamper made it 24-7 at the break and provided a spark for the Colts.

"Obviously, when you start the way that we started, you dig yourself a hole you can't come back from," Colts coach Chuck Pagano said.

Both teams left the stadium talking about needing to clean up their play.

"It wasn't the best win, but guess what, it was a great opener," said DeMarcus Ware, who had 1 1/2 sacks in his Denver debut after franchise-high 117 in nine seasons in Dallas.

Safety Rahim Moore had two interceptions in his first game since Nov. 17, when he underwent emergency surgery on his left calf because of a rare muscle condition known as compartment syndrome.

Luck brought the Colts within a touchdown when he found Hakeem Nicks for a 9-yard scoring strike with 3:26 remaining. And they got the ball back 28 seconds later after Denver went three-and-out.

Thomas' trio of touchdown grabs tied a franchise record for most in a game. Hall of Famer Shannon Sharpe did it three times.

Thomas hauled in a 3-yard touchdown toss with Jerrell Freeman draped on him. Then, he weaved his way for a 35-yard score with D'Quell Jackson in pursuit. Finally, he beat finally beat LaRon Landry on the line for a 5-yarder.

"I feel like it's my responsibility to make big plays when my team needs it," Thomas said. "Something I pride myself on is being ready for man coverage. It's like backyard football with your little brother or cousins. I don't believe you should be covered 1-on-1."

Early in the fourth quarter, the Colts had three defenders focused on Thomas when running back Montee Ball bulled his way in from 3 yards out to make it 31-10.

Luck found Dwayne Allen down the Broncos sideline for a 41-yard scoring completion and Indy needed five plays and 49 seconds to cover 45 yards and made it a one-score game.

Denver's defense came up with two big stops deep in its territory during a third quarter dominated by Indy. On fourth down at the 1, linebacker Brandon Marshall, making his first career start, stuffed Luck's run up the middle.

Later, when the Colts had a first down inside the 5, the Broncos held them to Adam Vinatieri's 25-yard field goal following Ware's third-down sack.

Last year, Manning let both his emotions and the Colts get the best of him in a 39-33 loss at Lucas Oil Stadium, the house he helped build.

This time, he didn't have to worry a homecoming in Indiana or Colts owner Jim Irsay getting inside his head with comments about winning only one Super Bowl together. Irsay is serving a six-game suspension for violating the league's personal conduct policy.

And the five-time MVP didn't have to worry about suspended pass-rusher Robert Mathis, who hounded him last year with two of the season-high four sacks Manning endured.

Manning was sacked once on this night. But he was victimized by more than a-half dozen drops, finishing 22 of 36 for 269 yards with no interceptions.

AP
Posted by Buzzcanadalive at 7:48 AM